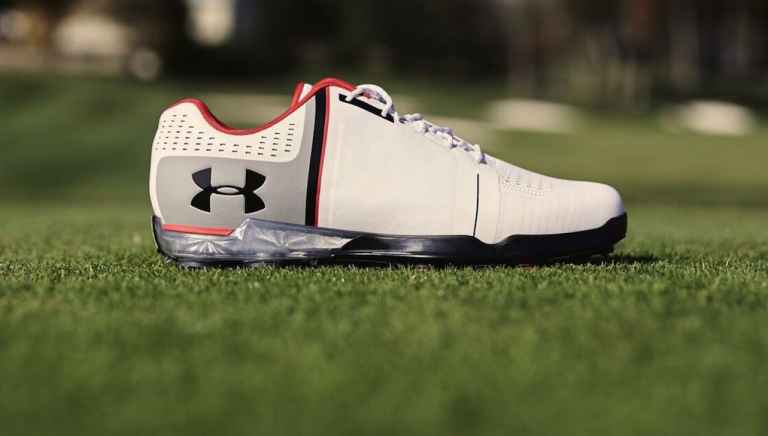 Unbeaten so far in 2017 regarding comfort and performance.

Under Armour’s rise has been remarkable. In 20 years, it has gone from founder Kevin Plank working out of his grandmother’s basement in Washington, to a global powerhouse chasing Nike as the number one brand in sports.

First known for producing moisture wicking tops - now commonplace in most sports - Under Armour moved into footwear a decade ago, which has been to the benefit of consumers worldwide.

UNDER ARMOUR UNVEILS SPIETH ONE SHOE

In 2017, their poster boy Jordan Spieth released his first signature Shoe - the Spieth One - featuring his new logo. It was big news in the golf world - and for good reason.

Under Armour are known for innovation and blooding new technology, and that is exactly what's on show in their shoe line-up for 2017.

We tested the Spieth One golf shoe at The Shire London.

The Spieth One golf shoe has a premium, performance aesthetic. Sleek, chic and futuristic.

Small details such as the “JS” logo on the side of the shoe is subtle and sophisticated, while it also serves a function as to increase breathability.

On close inspection the shoe looks quite busy, but they don’t look cluttered or loud in any way.

Looking down on the shoe, it has a narrow, compact, classy look. Cleats slightly protrude from the edges - while this caused us no issues it may bother some.

Outstanding. Unbeaten so far in 2017 regarding comfort and performance.

Under Armour billed this shoe as being engineered “down to a science”, a nod to Jordan Spieth’s precise approach to golf - the chemistry is spot on.

Rotational Resistance Traction is Under Armour technology they think will stick around for years to come.

The spike system reduces twisting during the swing, thanks to an ingenious spike design developed with Champ, which sees different cleats being used on the edges of the shoe.

A video showing Spieth hitting in a previous shoe, which we saw at the launch, shows he is much more stable in the Spieth One.

It definitely aided our balance and also reduced slipping through the swing, although we are unable to accurately quantify this. By feeling confident you will stay locked to the ground, golfers will be able to swing at the ball 100% without fear of losing balance.

Out of the box the Under Armour Spieth One golf shoes feel superb. A one-seam upper combines with a soft outsole and firm heel for excellent comfort no matter how many holes you want to play. While it offers heaps of cushioning, it also feels rigid through the swing, allowing golfers to generate maximum power.

While the shoes may feel heavier than some when you hold them, they in fact tip the scales at around the same as the competition. The illusion they may weigh more is because Under Armour placed weight in tactical areas, which makes them feel heavier in the hand.

We played the Under Under Spieth one shoes in torrential rain, plodding through sodden fairways, and were pleased to experience no water entering into the shoe.

This was surprising, as they also offer loads of breathability. Some 100% waterproof shoes make the golfer feel like their feet are shrink-wrapped into the shoe, but this is opposite of the Spieth One.

The inner sole is removable, allowing golfers to put their own in if they please.

The Under Armour Spieth One golf shoe offers supreme levels of performance. There’s a heap of technology that has gone into this shoe, but Under Armour has kept the shoe looking classy and premium.

Rotational Resistance Traction keeps players locked into the shoe and offers excellent levels of grip, while there’s massive amounts of comfort straight out of the box.

A leading shoe for 2017, and Under Armour’s best to date.

Head to the Under Armour Golf website for more.