Bryson DeChambeau: I couldn't ENJOY the Ryder Cup win as much as I wanted to

DeChambeau has lifted the lid on the Ryder Cup celebrations as well as parting with his caddie Tim Tucker. 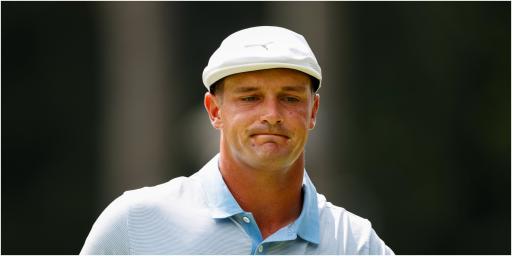 Bryson DeChambeau has had a successful few months recently in the golf world.

He was on the winning Ryder Cup team and then followed that up with an impressive display at the world long drive championships.

DeChambeau, 28, was pictured in the Bahamas relaxing before he gears up for his return to the PGA Tour.

MORE: WHAT CLUBS DID HERBERT USE TO WIN ON THE PGA TOUR?

MORE: ARE YOU ALLOWED TO DO THIS IN THE BUNKER?

MORE: WHAT WE KNOW ABOUT THE SAUDI GOLF SERIES

The American was even testing new Cobra drivers, but he didn't give us a glimpse of the new club.

Instead his social media team decided to replace the clubhead with that famous meme of a furious Brooks Koepka.

This week DeChambeau has been writing for Golf.Com.

He covered a range of topics that included his long drive debut, the Ryder Cup celebrations and what his former caddie Tim Tucker is up to.

And he has told of his goals with what he wants to achieve this season with his average ballspeed.

You can read the piece here.

Bryson wrote of the Ryder Cup experience: "The 2021 Ryder Cup was the best experience of my career. I can’t even put into words how much it meant to hear the fans chanting my name.

"All week, the team’s unity was unbelievable - Brooks Koepka and I even shared a hug.

"But, in all seriousness, the team came together and did something amazing at Whistling Straits, and I really believe it signals the start of an epic Team USA Ryder Cup run.

"Expect some incredible things in Rome in 2023 and beyond."

He added: "I couldn't enjoy the celebrations afterward maybe as much as I wanted to, because the next day I had to fly to Nevada for the PLDA World Championships - the U.S Open of long-driving.

"To make it to the round of 16 was something I was really proud of and surpassed my expectations.

"Before I set my sights on the 2022 PGA Tour season, I wanted to do another big speed push.

"Training for and competing in the PLDA was an important step. It’ll make me a better golfer - and help grow the game too."

DeChambeau also revealed that his former caddie has a new job working in the transportation industry.

He previously has told how he knew the day would come they would have to part ways as Tucker had health issues.

It has been reported elsewhere that Tucker had issues with his knees and that the physical demands were taking its toll.

The pair remain great friends, according to DeChambeau.

NEXT PAGE: HARRINGTON WADES IN ON MODEL LOCAL RULE