Padraig Harrington: Parents were in TEARS and Rory McIlroy took on too much

It appears the Ryder Cup fans' goading at Whistling Straits went too far. 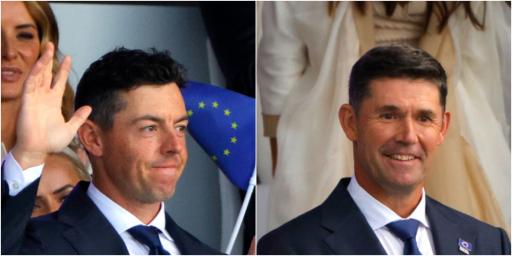 Padraig Harrington has revealed some parents of the European Ryder Cup players were reduced to tears at Whistling Straits.

In an exclusive interview with Rick Broadbent from the Times, Harrington has spoken in detail about what he thought of the week.

His European side were dismantled 19-9 in one of the heaviest ever defeats of the modern era and it was not a pretty sight.

A reflective Harrington, 50, spoke about the weight of responsibility Rory McIlroy shouldered and how Covid affected their preparations.

He also talked about how the United States' players finally let go of their their egos as they turned the screw at the Sunday Singles.

"He takes on too much, he wants to be everything," Harrington told the newspaper when asked about McIlroy.

"He’s trying to do good for golf but he’s wearing too many hats.

"His personality means he is the guy who will always tell you what he’s thinking."

"Today was to give something back. You just don't know if you get the opportunity to go again."

The #TeamEurope legend reflects on a difficult few days, and has warm words for Pádraig Harrington pic.twitter.com/vP6qjg4l9X

McIlroy famously broke down in tears on the 16th green after Europe's fate looked all but sealed.

Harrington added: "I was happy to see how much he cared but he needs to realise he does not owe everyone everything."

Goading players has become more vitriolic at the Ryder Cup in its most recent installments.

Shane Lowry revealed his wife Wendy got "dog's abuse" and it soured the week in what was his proudest ever achievement to represent the team.

Harrington told the paper: "I know that parents of players were in tears from what was being said.

"Often there was just one parent out there and it should have been one of the highlights of their lives to watch their son play in a Ryder Cup.

"How we deal with that going forward I don’t know.

"I insisted they put something on the tickets that people would be removed for bad behaviour and they were.

"Overall it was better than anticipated but you can’t change 50,000 fans.

"We’re going to have to change our attitude."

When asked about Lowry's wife, Harrington said: "Some of the stuff, like with Wendy and others, we heard nothing about until afterwards.

"Early in the week we had a meeting with everyone who would be inside the ropes and asked them not to bring the burden of people shouting to the players.

"I didn’t want it to affect them and it was not a big deal within the team."

Harrington was criticised by some members of the golf media and analysts after changing his pairings late in the day over a "ball blunder".

But he did shed some light on how the pandemic affected his preparations.

"If I want to go round with a chip on my shoulder, I have to blame Covid," he said.

"A year earlier we are a different team and so are they.

"But they picked the right players for the course, had the stats and were well-drilled on what they needed to do.

"In previous years they picked the best players and tried to match them up, this time they picked who would make the best foursomes and four-balls.

"There were two differences between what we did and what they did.

"They had an extra practice and I hate to say they lucked out, but it definitely helped because they got to play in the tournament wind.

"The other thing was they had four pods and we had one pod of 12.

"I wouldn’t change that, but they have struggled to manage their egos before.

RELATED: IS THIS THE SHOT OF THE YEAR ON EUROPEAN TOUR?!

NEXT PAGE: HOW DO YOU RATE RAFAEL NADAL'S GOLF SWING?