Dustin Johnson became just the third player in the modern era to win five points for his team at the Ryder Cup. 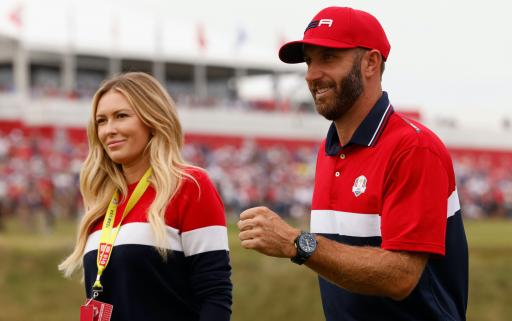 America produced the most dominant display in the modern era of the Ryder Cup to take back the trophy, winning 19-9 at Whistling Straits.

It was a record-breaking margin that had been brewing from the very first session on Friday morning. It was in this session that Dustin Johnson set upon his own piece of history.

Being the oldest player in the team, Johnson played in all five sessions of the event and earned five points, over a quarter of what his whole team produced over the week.

By doing so, Johnson became only the third player to pick up five points at the Ryder Cup since Team Europe was formed in 1979.

It was in 1979 when Larry Nelson earned maximum points against Europe at The Greenbrier. He won all four of his pairs matches alongside Lanny Wadkins and then he beat Seve Ballesteros in the singles. USA won the Ryder Cup 17-11 that year.

Francesco Molinari, fresh off winning The Open in 2018, won five points at Le Golf National when he formed a fantastic partnership with Tommy Fleetwood.

Teaming up with Collin Morikawa, Johnson and his impressive partner won in the Friday morning foursomes and in both sessions on Saturday.

He was paired with rookie Xander Schauffele in the Friday afternoon fourballs and they beat Bernd Wiesberger and Paul Casey 2&1.

RELATED: RYDER CUP AFTERMATH: IAN POULTER KEEPS HIS RECORD BUT IS THIS THE POSTMAN'S END?

Like many of the Americans, Johnson celebrated appropriately after winning the trophy with plenty of champagne and even his fiancé Paulina Gretzky was a victim to being covered in the bubbles.

It is only the two-time major champion's second win at the event. He admitted that he didn't know if he'd even play all five matches at this year's event, but it proved to be a master stroke from captain Stricker.