Team USA were absolutely dominant at the Ryder Cup this week, so how did we rate each player's performance? 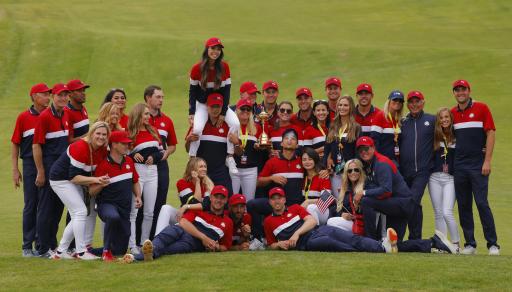 America were favourites to win the Ryder Cup at Whistling Straits, but it is fair to say that we did not expect a display of complete and utter dominance.

Steve Stricker's side led 11 - 5 heading into the Sunday singles and after losing only three matches in the event's final session, they stormed to a resounding 19-9 win.

It is the largest margin of victory since Team Europe was formed in 1979 and there were many fantastic individual performances within the US side.

From Dustin Johnson earning five points in five matches to the incredible rookie performances of Collin Morikawa and Xander Schauffele, you cannot say enough about the quality of these players.

Take a look at our player ratings for Team USA:

This rating requires no thought. DJ formed a fantastic partnership with Morikawa to win all three of the matches that they teamed up in. He also was paired with rookie Schauffele in the Friday afternoon fourballs and they beat Bernd Wiesberger and Paul Casey 2&1.

The two-time major champion almost capped it off with the tournament-winning putt, but he had to wait until the 18th hole to beat Casey and become just the third player in the modern era to earn maximum points.

Although Morikawa secured the decisive half-point against Viktor Hovland, he would have been disappointed not to win his first Ryder Cup singles match.

Nonetheless, he was a scintillating addition to the US side, earning 3.5 points on his debut. These will no doubt be the first points of many that he will win at the event for years to come.

The Olympic gold medallist is by no means your standard Ryder Cup rookie. Teaming up with Johnson and good friend Patrick Cantlay, he won all three of his pairs matches in the first two days.

He could not overcome a resurgent Rory McIlroy in the Sunday singles, but this was the only blemish in a fantastic week for Schauffele.

Brooks Koepka added two wins and two losses to his Ryder Cup record this week. He and Daniel Berger beat Lee Westwood and Matt Fitzpatrick in the Friday morning foursomes.

Koepka came up against Jon Rahm and Sergio Garcia twice on Saturday and lost twice, but he defeated Bernd Wiesberger 2&1 in the singles to deliver a valuable contribution to USA's record win.

Harris English secured one point on his first Ryder Cup appearance in what has been a fantastic season for the 32-year-old on the PGA Tour.

He teamed up with Tony Finau to beat Rory McIlroy and Shane Lowry in the Friday fourballs and this will no doubt be the highlight of his debut tournament.

On his second Ryder Cup appearance, Thomas earned 2.5 points at Whistling Straits but his highlight came on Sunday by beating the impressive Tyrrell Hatton 4&3.

Teaming up with his good friend Jordan Spieth, they beat the rookie pair of Viktor Hovland and Bernd Wiesberger in the Saturday foursomes to continue their great record as a duo.

Although Spieth looks to be a fresh-faced, young golfer, he brought a lot of experience to the US side with his three major championship wins.

It wasn't Spieth's finest week, earning 1.5 points for America, but as I said previously, he and Thomas developed their partnership further with a win over Viktor Hovland and Bernd Wiesberger in the Saturday foursomes.

He may have been an interesting wildcard from Stricker, but Berger delivered two points on his debut, including a win over Matt Fitzpatrick in the Sunday singles.

It was great to see him team up with Brooks Koepka, taking one point in two matches together, and this could be a partnership we will see for years to come.

After his demolition job of Tommy Fleetwood in the singles matches of 2018, Tony Finau brought a lot of confidence heading into the matches at Whistling Straits.

He teamed up with Harris English to beat Rory McIlroy and Shane Lowry in the Friday fourballs, but this was the two-time PGA Tour winner's only win of the week.

Bryson DeChambeau played in three sessions at Whistling Straits and he won 2.5 points. He and Scottie Scheffler were forced into a half by Tyrrell Hatton and Jon Rahm in the Friday fourballs.

He was at his exhilarating best against European Ryder Cup legend Sergio Garcia on Sunday, securing an impressive 3&2 win over the Spaniard.

Scottie Scheffler produced arguably the performance of the tournament on the final day as he took down the World No. 1 Jon Rahm 4&3.

He also earned 1.5 points alongside DeChambeau. They formed an exciting and fruitful pairing and Scheffler fully justified his captain's pick.