European Ryder Cup captain has revealed that Ian Poulter and Sergio Garcia are likely to get amongst his picks for the upcoming matches. 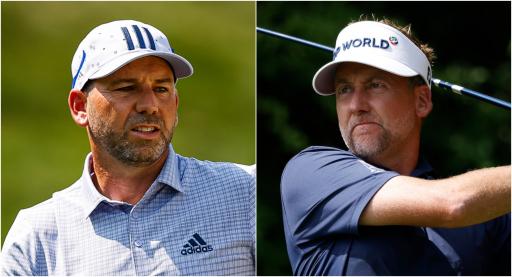 European Ryder Cup captain Padraig Harrington revealed that Ian Poulter and Sergio Garcia are in 'pole position' to be chosen for the event at Whistling Straits.

So far, Harrington has confirmed Jon Rahm, Rory McIlroy, Tommy Fleetwood, Paul Casey and debutant and World No. 14 Viktor Hovland as part of his side.

The next four places are due to be decided on the European and World points list after the BMW PGA Championship finishes, and then Harrington will choose the final three players.

The top four players in the European points list by the end of this Sunday will qualify, and then the next five players on the World points list, who have not already got in, will make the team.

Poulter and Garcia are stalwarts of the European team and they are on the cusp of qualification spots as of now, but it is likely that they will require a pick from Harrington to qualify.

"They are very strong. These two guys have both played great this year," said Harrington.

"They are both Ryder Cup veterans that have delivered in the Ryder Cup time and time again. It would be odd to see me not pick them, but you never know what is going to happen.

"You can't be sure after Sunday night until we know where we sit with things. They are certainly in pole position."

As we all know, Poulter lives for the Ryder Cup and in his six appearances, he has never lost a singles match. He was at the heart of the famous European comeback at Medinah in 2012.

The 45-year-old is likely to be joined by Garcia who is the record points scorer in the tournament's history for Team Europe, with a record of 22-12-7 bringing up 25.5 points over his nine appearances.

Players such as Shane Lowry, Tyrrell Hatton, Justin Rose, Lee Westwood, Bernd Wiesberger and Robert MacIntyre are all hopefuls to be confirmed in the 2021 Team Europe squad.

NEXT PAGE: RYDER CUP: NO PATRICK REED FOR USA AS STEVE STRICKER NAMES SIDE