Harris English attended the University of Georgia and he picked out the Georgia Bulldogs to beat the Arkansas Razorbacks. 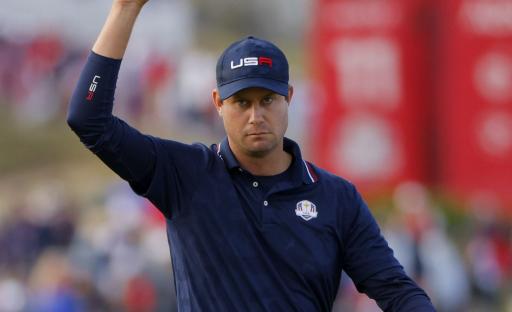 Harris English's year just keeps getting better and better. Fresh from the USA's record win at the Ryder Cup, English was chosen to be the College GameDay guest picker for a great match-up.

In the SEC East division, the Georgia Bulldogs took on the Arkansas Razorbacks. English picked out his very own Georgia to win and he was vindicated as they cruised to a 37-0 victory.

English couldn't go to the event without taking a special piece of silverware with him. In front of the excited crowd, he raised the Ryder Cup trophy along with taking a Team USA golf bag.

Other golfers such as Jack Nicklaus, Dustin Johnson, Rickie Fowler and Billy Horschel have also had the honour of being the guest picker on College GameDay.

The 32-year-old was a four-time All-American at Georgia and he has also won four times on the PGA Tour, with two of them coming in the 2021 season.

With his wins at the Sentry Tournament of Champions and the Travelers Championship, English was always going to be chosen by Steve Stricker to compete at the Ryder Cup.

Forming a strong partnership with Tony Finau, they beat the Irish pair of Rory McIlroy and Shane Lowry in the Friday fourballs, but lost to Lowry and Tyrrell Hatton in the Saturday fourballs.

English performed in front of excited and raucous crowds at Whistling Straits, so he will have enjoyed the atmosphere yesterday in Georgia without the pressure of picking up a golf club.