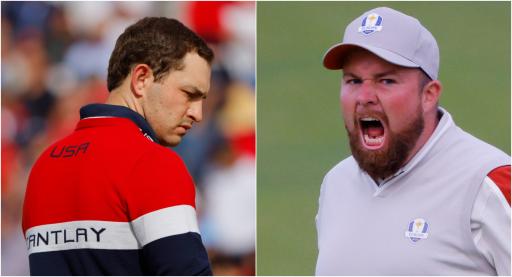 Shane Lowry said Patrick Cantlay "p****d him off" during their singles match at the Ryder Cup, which Cantlay won 4&2.

Although the Irishman showed passion and determination at the Ryder Cup, he could only deliver one point for his team alongside Tyrrell Hatton in the Saturday fourballs.

He had a tough task up against Cantlay in the singles. The American won four times in the PGA Tour season and he also won the FedEx Cup.

Speaking to Paddy Power, Lowry said that he was annoyed by Cantlay's behaviour on the 8th hole at Whistling Straits. The home crowd was a big factor in favour of America all week, and Cantlay tried to use this to his advantage in this match.

RELATED: A TRIP DOWN MEMORY LANE: 5 OF THE MOST ICONIC PLAYER/CADDIE PARTNERSHIPS EVER

"I was lining up my putt and he was riling up the crowd which I didn’t think was great. In Rome, we’ll hopefully win and win in a different style, that’s how I’m looking at it."

The 2019 Open champion was one of captain Padraig Harrington's picks for the event. It was an extremely humbling and tough task for Lowry to impress, as it was a hostile tournament on away soil.

The Ryder Cup is the most tribal event in golf. It is the only event in the sport that can be compared to the tensions seen at football matches, and this can spill over.

Unfortunately, Lowry's wife Wendy was subjected to abuse by American spectators, which is something that cannot be tolerated and is completely unnecessary.

"I didn't think it was that bad until I asked my wife what it was like for her, and they got dog's abuse going around as well," Lowry said.

"It's not very nice for them to have to listen to it, but that's a small percentage of the crowd.

"Some people are idiots, especially when you drink. Nobody turns into a genius with drinking, and that's what they were doing last week. Especially if you were out in the afternoon matches, it was loud."

The 34-year-old was sent out second in the Sunday singles, so Harrington put a lot of trust and pressure on Lowry to deliver. Europe only won three singles matches.

Lowry is playing in a very different atmosphere this week at the Alfred Dunhill Links Championship. He admitted that the cauldron of Whistling Straits was very hard to play in.

The 2023 Ryder Cup in Italy will be a very different prospect for Team Europe and they will be hoping that their home crowd will act as the 13th man once again.

"They used the crowd to their advantage last week and it obviously worked for them. It was hard to play golf in that atmosphere," Lowry added.

"You just hear cheers and you just think ‘oh that’s another hole lost’ but it is what it is.

"I was thinking ‘this is a bit mad, it’s pretty cool’ as you’re being booed all over the shop, but as the week goes on, it does get pretty annoying especially when you’re getting beat. It’s quite a frustrating situation to be in, but I loved every minute of it."

NEXT PAGE: "HARD TO PLAY GOLF IN THAT ATMOSPHERE" - SHANE LOWRY ON "UNREAL" RYDER CUP WEEK