Jon Rahm is one of the many superstars of the golf world to be playing at the JP McManus Pro-Am and he is a huge fan of Adare Manor. 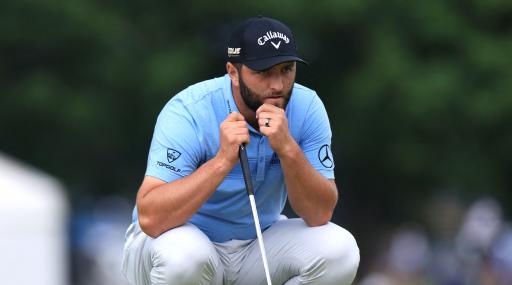 Former World No.1 Jon Rahm joked that Adare Manor needs to be "de-Americanised" ahead of the Ryder Cup in 2027 if Europe is to have a chance of beating Team USA.

The course in Limerick couldn't be in better condition and Rahm complemented the lush fairways and perfect greens which will host the Ryder Cup in five years' time.

Related: Jordan Spieth DISQUALIFIED during the first round of the JP McManus Pro-Am

Rahm is one of 14 players from the top 15 in the world who have teed it up in the first round of the JP McManus Pro-Am. The Spaniard started at 1.05 pm earlier this afternoon, 10 minutes after Bryson DeChambeau.

He described the warm welcome he has received since arriving back in Ireland. Rahm is a dual winner of the Irish Open on the DP World Tour, so he has taken to Irish golf like a duck to water.

"You would think I'm Irish based on how the crowd are reacting to me today! That first win in Portstewart was very unique, but the support and the way the crowd embraced me at Lahinch was very unique," Rahm told Sky Sports Golf on Monday.

"It's a unique golf course and the way I played at the weekend made it so much more special. They're both very different in their own way, but that affection I got from the town and the crowd at Lahinch, I will always remember that.

"JP (McManus) may have to de-Americanise it. Right now it is perfect for the US team. We'll need more bunkers, more rough, a little different style, but what a wonderful place and that will be for sure a memorable Ryder Cup so I hope I'm a part of it."

Rahm was part of Padraig Harrington's European side that was humbled by the United States at the 2021 Ryder Cup in Whistling Straits. He earned 3.5 points from five matches, but it wasn't enough to stop the 19-9 drubbing.

Tiger Woods, Scottie Scheffler, Rory McIlroy and Justin Thomas are just a handful of names to complete the star-studded line-up at this year's JP McManus Pro-Am. Since 1990, the event has raised over $140 million for charity.

Next Page: LIV Golf: Which players have made the most money since start of controversial series?