LIV Golf. Tiger Woods is back. Talor Gooch's incredible Ryder Cup comment. Catch up in what you missed in the golf world. 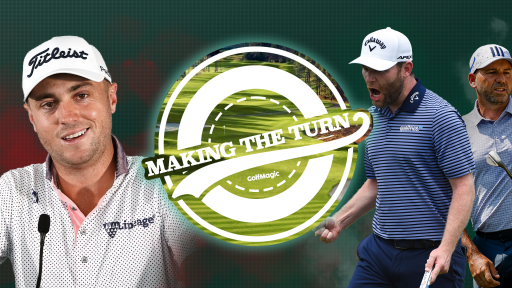 Welcome to Making The Turn, where GolfMagic’s Ben Smith re-caps what has happened in golf over the last seven days.

Another week has passed in the golf world and it provided more drama than Arlo White commentating on a six-foot putt for par in a LIV Golf event.

What have you made of LIV Golf so far? Cringeworthy-PR aside it is … absolutely f***ing dreadful.

The highlight of the coverage for me was Dom Boulet informing us that LIV Golf merchandise was selling out fast.

Tiger on the prowl again

We began the week with some welcome Tiger Woods news. Woods, 46, limped out of the most recent U.S. PGA Championship at Southern Hills, casting doubt on his playing future.

Still, when recently watching one of his daughter Samantha’s soccer games, the big cat just couldn’t help himself from doing some golf drills on the touchline.

What an Open Championship we have in store.

In the latest LIV Golf news, Ryder Cup Europe’s greatest ever player Sergio Garcia was knocked off Bob MacIntyre’s Christmas card list with his alleged rant when the DP World Tour fines and suspensions were announced.

In equipment news, Patrick Reed split with PXG after a short-lived marriage with the brand. He’s now using a Grindworks driver.

Phil Mickelson was also tinkering with some equipment and was using this putter during the second LIV Golf series event in Portland at Pumpkin Ridge Golf Club.

Can we just pause for a moment on the topic of Mickelson and appreciate this outstandingly brave chirp from a spectator?

Presented without comment, this shirt worn by Perez sums it all up.

I’ll be honest, seeing Perez go out of his way to bash the PGA Tour is absolutely incredible to me.

The bloke has ONE top-10 in a major and has won three times on Tour in 28 years (in the winter) as a pro and has amassed nearly $30million in earnings.

Hilariously, he moaned about having to miss the birth of his son to play golf.

Hey Pat, nobody forced you to do that.

Pat Perez’s shirt will have no doubt enraged the family members of the survivors and victims of the 9/11 terrorist attacks.

They had one message to the LIV Golf players: “We are not going away”.

DP World Tour chief executive responded to the LIV Golf players who issued a legal threat at the start of the week.

His dig towards a certain Graeme McDowell was incredible.

Garrigus found himself at the centre of a media storm when he was revealed to be the first player who requested a waiver from the PGA Tour to play in the first LIV Golf event.

You don’t have to agree with everything he says but you have to appreciate his honesty.

The social media superstar prodded fun at herself with this post about Matthew Fitzpatrick training shirtless.

No, I can’t quite believe Gooch said this.

But this is a fella who claimed to be so stupid as to not know what sportswashing is.

Gooch capped off his week by saying that he didn’t think the PGA Tour “would actually” suspend us.

See you next week.