Team USA produced another dominant display in the afternoon fourballs on Friday, taking the second session 3-1 as they did in the morning. 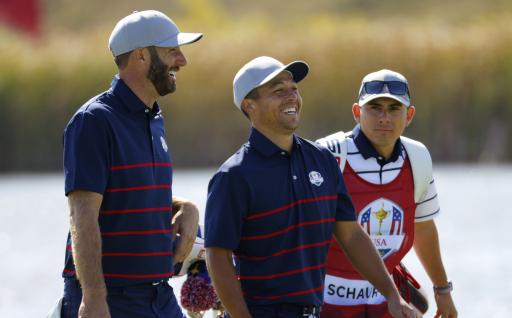 The United States are in cruise control after the first day of the Ryder Cup, subjecting Europe to a 3-1 defeat in the afternoon fourballs and extending their lead to 6-2 for the event.

Padraig Harrington's side struggled to keep up with the relentless scoring and flow of the American team and their afternoon was epitomised by the performances of Dustin Johnson and Xander Schauffele.

Both players picked up points in their respective pairs matches in the morning foursomes and they took control of their fourball match against Paul Casey and Bernd Wiesberger with three birdies in their first five holes.

They were 3 up in this opening stretch but with birdies from both Wiesberger and Casey on the 6th and 9th holes, the gap was reduced to 1 up at the turn.

But Johnson continued to impress on his 5th Ryder Cup appearance and with birdies at the 10th and 11th holes, this helped them see out an eventual 2&1 win that was never under threat.

Despite losing 5&3 alongside Ian Poulter in the morning foursomes, Harrington selected Rory McIlroy to play with Shane Lowry against Tony Finau and rookie Harris English in the fourball session on Friday.

The Irish pair bumped into a red hot Finau, who made eight scores of three in his first 13 holes. His round was complemented by a birdie from English on the 8th hole too.

Although Europe were 1 up after five holes in this match, Finau and English proved far too strong and they ran out as 4&3 winners, and the score in the Ryder Cup was 5-1 to the red side.

The two remaining matches were absolutely vital, one of which saw World No. 1 Jon Rahm and Tyrrell Hatton take on Bryson DeChambeau and Scottie Scheffler.

This match was a classic and both teams experienced ups and downs on the front nine. A DeChambeau eagle at the 5th hole and birdie at the 8th hole was answered with birdies at the 4th and 9th holes from Hatton and Rahm.

In a tense finish, growing fan favourite DeChambeau made a crucial par at the par-4 15th to put America 1 up. But under the gun, Hatton threw his approach in close to the 18th pin and fist-pumped a great birdie to secure a half for Team Europe.

The scores were now 5.5 - 1.5 and it is safe to say that Tommy Fleetwood may lose some sleep tonight thinking of how he and Viktor Hovland didn't beat Justin Thomas and Patrick Cantlay in the last match of day one.

Although the American duo went 1 up after one hole, Fleetwood and his rookie partner made three birdies between them in their next seven holes to move to 3 up after eight holes.

A Thomas birdie at the 9th hole and a birdie from the FedEx Cup champion at the 12th hole took the deficit to just 1 up, before Thomas eagled the par-5 16th hole to draw the scores level.

Fleetwood missed golden chances on the back nine to extend Europe's advantage in this match, but after an uneventful 18th hole, the game was halved and the score ended 6-2 in America's favour.

NEXT PAGE: MICHAEL JORDAN REACTS IN STYLE TO CLUTCH DUSTIN JOHNSON PUTT AT THE RYDER CUP