Paul McGinley admitted that Team USA were strong on and off the course at Whistling Straits and Europe must "raise their game." 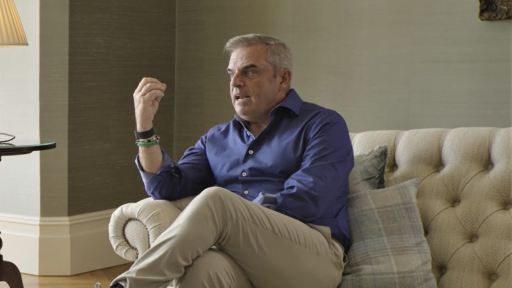 European golf icon Paul McGinley said that Team USA adopted the ideas of Team Europe during the last Ryder Cup which led to a record-breaking 19-9 victory.

The Irishman, 55, used the European side's captain succession plan as an example of a model that America now use. This led to a successful captaincy for Steve Stricker at Whistling Straits.

Zach Johnson has been appointed as the captain for the matches in Italy next year, while Europe is yet to name their leader which will look to keep Europe's 30-year unbeaten streak on home soil. Johnson has been a vice-captain twice before.

As strong as America's team was back in September, McGinley admitted that Europe must do better in order to stop the sudden American wave of confidence.

"The Americans have stolen a lot of our ideas over the last few years, such as our succession plan," said McGinley, speaking exclusively to GolfMagic.

"I thought America at Whistling Straits were the best I’ve ever seen them, not because of the golf they played, but the decisions they made and how organised they were off the course.

"Steve Stricker did a great job and I think he simplified a lot of things. They dealt with a lot of stuff and mistakes that they may have made in the past.

"It was the strongest that I’d seen them off the course and not everybody thinks that the Ryder Cup captain has a huge influence in what happens, and it’s all about how you play in the golf and how many putts you hole.

"It’s a lot deeper than that, I’ve been here and I’ve experienced it as a player, a vice-captain and a captain. I can assure you that the captain makes a massive influence on how cohesive the team is going to be that week.

"We’ve got to raise our game, that’s the bottom line. We had a lot of headwinds against us in Whistling Straits, but we didn’t play well as a team.

"Our scoring was not good and we didn’t play well against the golf course and we have to raise our standards because America are coming out stronger than ever before."

McGinley revealed that one of Luke Donald, Henrik Stenson, Paul Lawrie and Robert Karlsson will be the captain of Europe next year and a decision will be made in the next month.

The four-time European Tour winner played in four Ryder Cups himself and he famously holed the winning putt for Europe in 2002 at The Belfry.

In 2014, McGinley captained the side at Gleneagles and led them to a thumping 16.5 - 11.5 victory over Tom Watson's American side.