Dustin Johnson and Collin Morikawa will be reunited against Paul Casey and Tyrrell Hatton in the Saturday morning foursomes at the Ryder Cup. 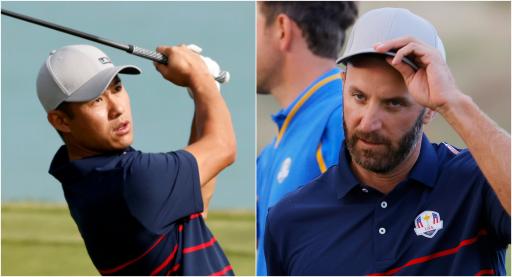 World No. 2 Dustin Johnson and Open champion Collin Morikawa will be paired together again in the Saturday morning foursomes against Paul Casey and Tyrrell Hatton at the Ryder Cup.

The American duo won their Friday foursomes match on day one against Casey and the Norwegian rookie Viktor Hovland. Johnson is looking for his third win in as many matches in 2021 after he and Xander Schauffele beat Casey and Bernd Wiesberger in the Friday fourballs.

It has been a tough start to the Ryder Cup for the 44-year-old Casey. He was paired together with Hatton at Le Golf National in 2018 and they will hope to claw back the current 6-2 deficit.

This will be the second match out on Saturday morning. The first match will see Brooks Koepka and Daniel Berger return to the course against the unbeaten Spanish duo of Jon Rahm and Sergio Garcia.

RELATED: USA BUILD COMMANDING 6-2 LEAD OVER EUROPE AFTER DAY ONE OF RYDER CUP

In the foursomes on day one, Koepka and his rookie partner Berger prevailed against Lee Westwood and Matt Fitzpatrick 2&1, while Rahm and Garcia beat Jordan Spieth and Justin Thomas 3&1.

The third match of the Saturday foursomes session will see the European rookie pair of Hovland and Wiesberger take on Spieth and Thomas.

Hovland, 24, managed to gain his first half-point as a Ryder Cup player on Friday, as he and Tommy Fleetwood battled away with Thomas and Patrick Cantlay.

The fourth and final match of tomorrow's foursomes session will see Cantlay resume his partnership with Schauffele. They will face Westwood and Fitzpatrick who will be looking to redeem themselves from their defeat in the same format on day one.

America have won the first two sessions of the Ryder Cup 3-1 and their emphatic start will be urged on by their strong support in Wisconsin at the weekend.