GolfMagic takes a look at five players who famously did not make the cut at the Ryder Cup. 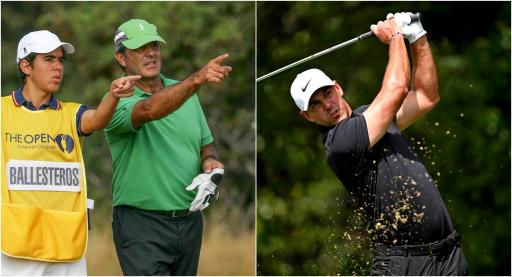 It wouldn't be the Ryder Cup without a big name missing out.

This year Brooks Koepka faces a race against time to try and make sure he can play for Steve Stricker's side in Wisconsin.

Of course, he has already qualified but a freak wrist injury he sustained meant he had to withdraw at the 12th hole of the BMW Championship.

It was the same issue he had back in 2017 which kept him out of The Masters a year later.

Koepka was scheduled to have an X-ray which will determine his fate as the US camp holds its breath.

This is the moment @BKoepka hurt himself which later resulted in him having to drop out of the #TourChampionship pic.twitter.com/IPhSfVKBcL

The good news is that Patrick Reed has declared himself fit after he played 72 holes at the Tour Championship.

He may well have to change his moniker from Captain America to Captain Comeback after he battled a bout of life-threatening pneumonia only a few weeks ago if he gets the nod.

But what about some of the famous players who have missed out at the Ryder Cup?

Here, GolfMagic takes a look at the top five.

In Valhalla, 2008, Ian Poulter had missed the last qualifying event at Gleneagles and played in the USA, despite being about to still automatically qualify. Sir Nick Faldo gave Poulter the nod despite Darren Clarke winning twice that season.

Sir Nick Faldo missed out at Brookline in 1999 where the USA won. By that time, Faldo had already played in 11 matches but wasn't playing well. Team captain Mark James was described as "famously dismissive" and appeared to clash with Faldo. James reportedly threw a letter of support from Faldo in the bin.

Bernhard Langer also missed out at Brookline in 1999. The German was a favourite to get the second pick, but Mark James chose Andrew Coltart. James didn't play him until the Sunday singles. Remember who Coltart played? None other than Tiger Woods, who won the point 3&2.

Woods famously had to withdraw from Gleneagles in 2014 after persistent back problems flared up again, disrupting his season. It spared captain Tom Watson a difficult decision, as the big cat displayed no real form or fitness in his four prior comeback events.

In 1981 Seve Ballesteros was left out of the side after he became embroiled in a row with the European Tour about appearance money. He was labelled greedy, while some saw it from his point of view.

He had played so few events that year he was reliant on a pick from captain John Jacobs and selectors Neil Coles and Bernhard Langer. Seve wasn't picked, but he was back for the Ryder Cup two years later, and became the catalyst of the European team for years to come.

NEXT PAGE: THE OPEN TO BE HELD AT ROYAL PORTRUSH IN 2025