It is one of the biggest weeks in Daniel Berger's career as he makes his debut at the Ryder Cup at Whistling Straits. 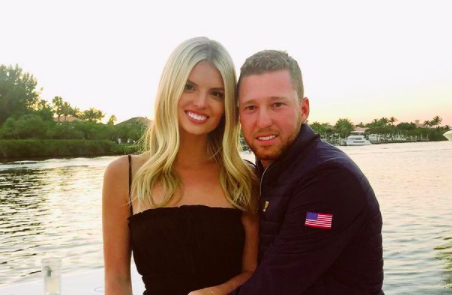 Daniel Berger has proven to be one of the most impressive American players in the world and his late-season form was rewarded with a captain's pick for the Ryder Cup.

Berger won the AT&T Pebble Beach Pro-Am earlier in the season. This was the fourth PGA Tour victory of his career and he only joined the tour six years ago.

He has earned his place in Steve Stricker's US side and not only will it be an amazing week for him in Wisconsin, but also his family and partner Tori Slater.

RELATED: IS BRYSON DECHAMBEAU CHANGING PERCEPTIONS AT THE RYDER CUP?

Tori, her full name being Victoria, attended the University of Kentucky. She then transferred to Florida Atlantic University to study marketing and business.

It is not certain where Tori works right now, but she is believed to be a realtor specialising in different areas of Florida.

She has supported Berger at many PGA tour events during his career, such as during the par-3 tournament at The Masters in 2016 when she caddied for him.

According to her Instagram page, she appears to be based in Jupiter, Florida and by the looks of her pictures, she spends a lot of time in the sunshine and the sand.

Tori is set to watch her partner Berger tee it up in the first session of the Ryder Cup on Friday. Stricker has paired him with Brooks Koepka and they will face off against Lee Westwood and Matt Fitzpatrick.

Ryder Cup
daniel berger
tori slater
Florida
Whistling Straits
Previous
Ryder Cup 2021: Where is Tiger Woods and will he EVER play golf again?
Next
When is the Ryder Cup 2023? Tickets, dates and venue for the 44th edition