Who will be the next Ryder Cup captain after Henrik Stenson chose LIV Golf?

These are the leading candidates to take on the Ryder Cup captaincy after Henrik Stenson decided to play LIV Golf. 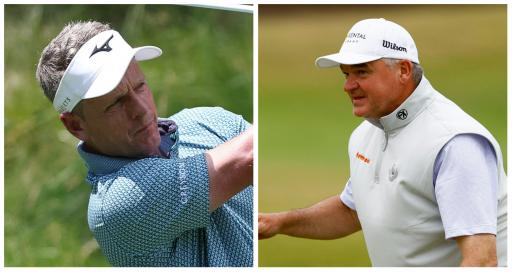 Henrik Stenson has been stripped of the Ryder Cup captaincy and now Team Europe are on the lookout for a new leader to help avenge their 19-9 humiliation at Whistling Straits.

Make no mistake, the Swede's decision to sign up for LIV Golf is a massive headache and hugely embarrassing for Ryder Cup Europe.

Stenson, 46, previously said he was "fully committed" to leading the team in Rome after reportedly being issued an ultimatum over his future: LIV or be the captain.

He has now come under huge scrutiny by fellow players, fans and analysts for his decision to turn his back on the captaincy. The reported fee Stenson has signed up for is allegedly £40million.

The last man to lead Team Europe, Padraig Harrington, said "we knew this decision was coming" and believes they have more than enough time to "get their ducks in row".

"We are already talking about when we are meeting to elect the next captain," said Harrington.

"It is really not going to interfere with the Ryder Cup in any shape or form. I do wish he [Stenson] had waited 15 months. Everyone has to make the right decision financially for themselves."

"It wouldn't have been any harm as he had signed commitment [with Ryder Cup Europe] to wait those 15 months, the same deal would have been on the table in 15 months' time. It is a pity for him to go but 15 months is loads of time to get someone in place and get a feel for what they are doing."

With the likes of Ian Poulter, Lee Westwood, Sergio Garcia, Martin Kaymer, Graeme McDowell and Paul Casey all signing up for LIV, it seems as though the Europeans have lost an entire generation of captains.

There are quite a few candidates that could now step into the fold.

GolfMagic decided to take a look.

Don't forget to let us know in on our social channels what you think.

If the rumours are true and Henrik Stenson joins LIV Golf and gets axed as European Ryder Cup captain, who should take the reigns for 2023 in Rome?

Former World No.1 Luke Donald is a veteran of four Ryder Cups and he has never been on the losing side as a player.

He was considered to be one of the front runners originally before the selection team chose Stenson.

He was a vice-captain twice, in 2018 and 2021, and is a popular figure among the current group of players.

Donald has made no secret of his desire to be captain.

Lawrie, a former Open champion, was also considered in the running alongside Stenson.

The Scot was in the 1999 team at Brookline and was also part of the Miracle at Medinah in 2012, playing a crucial role in the win after beating Brandt Snedeker in the Sunday singles.

Lawrie has also served as a vice-captain, in 2016.

Yesterday, Lawrie wrote on Twitter that his name has "never been out of the hat" but there are "so many outstanding candidates who have all deserved the honour".

The Swede was also touted as a replacement for Thomas Bjorn.

Bjorn was named as one of Stenson's vice-captains. He skippered the team to victory in 2018 at Le Golf National.

He's been on the winning side three times as a player.

Bjorn would be a fine choice to return but he may fall into the category of "one and done" and prefer someone else have the opportunity.

The older brother of Francesco is a bit of a longshot but was part of the 2010 winning side and has already served as a vice-captain.

What is in his favour is that the match is on his home turf.

He's also known to have an analytical approach.