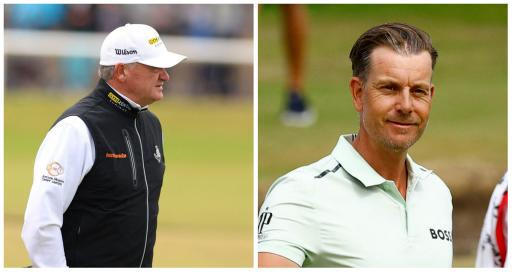 It's fair to say Ryder Cup Europe's campaign is in a bit of a mess at the moment after Henrik Stenson was stripped of the captaincy because he signed up for LIV Golf.

There are a number of candidates who could potentially replace the 46-year-old Swede, who said he disagreed with the decision to remove him from the post.

One of those is former Open winner Paul Lawrie, who along with Luke Donald, Robert Karlsson and Edoardo Molinari has been touted as a possible captain.

But news has filtered through that Thomas Bjorn, the 2018 winning captain at Le Golf National, could also come back into the fold for a second stint.

This is because Wentworth HQ reportedly see the Dane as the type of figure who could deal with the difficult situation after Stenson's £40million LIV deal and the fall out.

Lawrie has some strong words about the potential of Bjorn returning. He even went so far as describing the process of selecting the captaincy "a bit of a joke".

He told the Telegraph's Jamie Corrigan: "The process is the process. My situation has not changed, I assume they just go back to the way they did it before, with the five guys voting on the other three people who were up for the job initially.

"I'm led to believe that might not be the case. And if it's not the case then it’s a joke, to be honest.

"You hear Thomas' name being bandied about now. I don't see how that can be the case. He's voting. How can you get the job when you are voting? Now that Henrik is out of the picture, surely the same five people vote for the three who were up for the job in the first place.

"You can't change the rules. The process is the process. Let's see. It’ll be fun and games if it's not, I'm telling you."

The publication report that Bjorn would recuse himself from the panel if he is indeed in the frame to replace Stenson.

Ryder Cup Europe are also reportedly going to take into account the views of former captains and present players such as Rory McIlroy.

McIlroy memorably broke down in tears at Whistling Straits when defeat was all but confirmed at the Ryder Cup last September.

Bjorn told the latest situation: "I'd like to digest it before I have anything to say.

"There's just so much to think about. It's emotional and I just want to digest it all. Was it a shock [Stenson leaving]? Nothing shocks me at the moment if I'm going to be honest.

"We've got time and it'll be sorted. But I just think we all need to deal with what's right in front of us now. Just kind of breathe a little."

Elsewhere, Padraig Harrington has reacted to the Stenson news by saying he was "disappointed" with the Swede.

"He signed a deal, just wait 15 months, do your job and then move on then," Harrington said.

Next page: Henrik Stenson dropped by sponsor after LIV deal