LIV Golf announced Henrik Stenson as their latest recruit yesterday but they might want to double check his nationality. 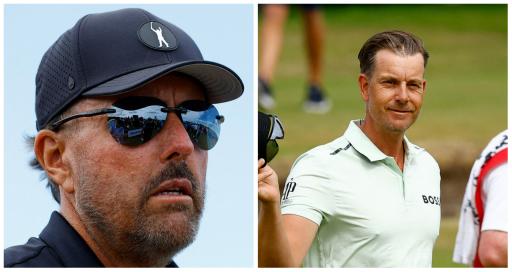 LIV Golf appeared to make a bit of a hash with their announcement of new signing of Henrik Stenson by referring to him as English.

Stenson, 46, has now been stripped of the Ryder Cup captaincy after his "commercially driven" decision to join the Saudi-funded series.

In a lengthy statement, Stenson claimed that he disagreed with the decision by Ryder Cup Europe to take the honour away from him.

Now they are on the search for a new captain, with Thomas Bjorn the betting favourite to take charge for a second time.

Luke Donald, Paul Lawrie and Robert Karlsson are also touted as potential replacements to take charge in Rome next year.

Here's the gaffe by LIV:

The only problem was Grace, who won the second LIV Golf event in Portland at Pumpkin Ridge Golf Club, was not in the field.

They had to hastily delete their post wishing the 34-year-old well. Oh well, better luck next time.

Elsewhere, LIV Golf have now confirmed the full field for the third event of their inaugural eight-event season.

The players are heading to Bedminster, in New Jersey this week for another tournament with a $25million prize purse.

Charles Howell III, who has made more than 600 PGA Tour starts, has been confirmed as the latest signing.

Along with Stenson, Jason Kokrak will also be teeing it up in the 48-man field.

Kokrak, a Golf Saudi ambassador, has long been assumed to be taking part.

The only question with Kokrak, though, is why it has taken so long for him to be confirmed as a LIV player.

Here is the full field for Bedminster.