Get to grips with the Spaniard 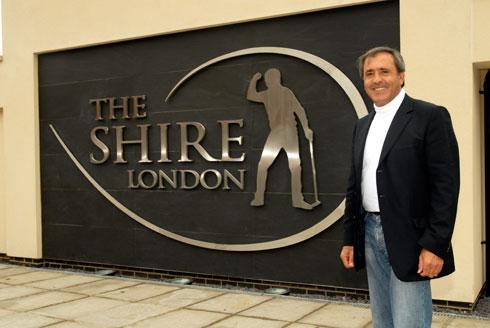 What better way to pay tribute to late great Seve Ballesteros than to tee up at the only course in the UK that carries his iconic name as the designer?

The Ballesteros ‘Masters’ course at The Shire, north of London, opened in 2007 and has been laid out like none other in the world - where no two consecutive holes are the same par on the inward and outward nine.

And this was no coincidence. It’s all part of the three-time Open champion’s core design philosophy to create maximum variety and ultimate enjoyment.

He said at the time: “I’ve designed many courses around the world but with my first in the UK, I was waiting for an opportunity to create a golf complex with a course which looked and played like I thought it should. And with first class clubhouse and leisure facilities, too.”

These words of Seve are etched on the front of the scorecard, with his famous fist pump celebration when winning his second Open at St Andrews in 1984.

Located just a drive and a wedge from the M25, this 7,028-yard parkland course is created from the natural landscape with gentle slopes and inviting fairways.

All the fairways have irrigation systems but it was testament to the drainage that we were able to play in Seve’s footsteps, even though some puddles still lay in the low spots despite torrential storms only hours earlier.

Few courses in the world start with a testing par-3 and even Royal Lytham & St Anne’s opener - scene of one of Seve’s most cherished majors - isn’t guarded by a lake front and back. For the first shot of the day, it’s a stern examination even from forward tees, especially with bunkers guarding either side, too. It’s every bit the major championship start.

In true Ballesteros style, it’s followed by a risk and reward par-4. Do you pull out the chief and attempt to carry the 240-yards across water, or lay up sensibly with an iron. The decision probably rests on whether you were swimming at the first.

The unusual sequence is followed by the par-5 third, allowing you to open the shoulders and give it rip. Find the fairway below at 250 yards and although it's uphill you can reach the front of the green in two.

Another nerve-wrecking par-3 across water measuring 180 yards follows, avoiding the thin wires stretched between pylons. My effort took a deflection and demanded a re-load, and I was happy to record my par.

Another 550-yard dogleg par-5 follows before heading to, statistically, the toughest hole on the course at the 430-yard par-4 sixth. And it’s easy to see why, as the Spaniard offers the option to take on the carry over a deep ditch or opt for a mid to long-iron into the green which slopes viciously back to front.

The tranquil 120-yard par-3 seventh is played to an island green and played downhill, looked as if it required a flick with the wedge. I not only under-estimated but miscalculated and splashed down alongside the feeding swans.

Measuring 400 yards, the ninth plays uphill and if you miss right, as I did, you are hacking out sideways from the trees and deep rough. Favour the left and it gives the best look at the pin on a parapet at the top of the course.

The 10th is the toughest hole in my book and sweeps downhill. With water left at driving distance to and on the right of the green, this hole requires a premium on accuracy.

There are, however, scoring opportunities on the par-5s at 11, 13 and 16, particularly 13, which measures just 450 yards. Even the Editor recorded a birdie thanks to a driver approach just short of the green! The short 385-yard par-4 15th will also be well within range for most in dry conditions.

But if you’re looking to finish in style, you will need some sort of Seve-esque magic to conjure up a birdie at 18. The tee shot demands pin-point accuracy to a fairway that’s blind. Even then, I was faced with a mid to long iron into a wide but shallow green that sits behind an appropriately S-shaped lake. It’s a final hole tribute to both The Shire and to Seve.

None of us can ever hope to play like him, but from time you can feel his presence looking down with a quizzical grin. Seve has left an indelible mark on the game - now he has left a permanent legacy we can all enjoy.

Have you had the pleasure of playing The Shire? Why not provide your own review? Remember to follow @Golfmagic or join us on our Facebook page for all the latest golf news.