9/11 group react to Phil Mickelson press conference: "He should be ashamed"

Terry Strada, the chair of the 9/11 Families United group, wrote a strong reaction to Phil Mickelson's comments about joining the LIV Golf Series. 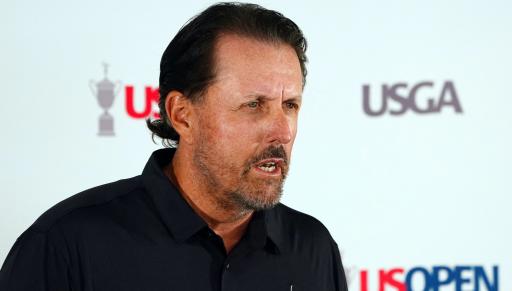 Terry Strada, the chair of the 9/11 Families United group, said Phil Mickelson should be ashamed of joining the LIV Golf Invitational Series, following his Monday press conference at the US Open.

In his press conference at The Country Club, Mickelson expressed his sympathy to families who lost loved ones in the 9/11 attacks in September 2001.

Strada lost her husband in the attacks and she wrote on behalf of 9/11 Families United that Mickelson "knows exactly what he's doing" with regards to his alleged $200 million pay cheque from Saudi Arabia.

In their original statement to Mickelson, Dustin Johnson, Kevin Na, Bryson DeChambeau and Patrick Reed, the group outlined that 15 of the 19 hijackers were Saudi and that the Saudi government assisted the hijackers during the catastrophic attacks.

"Phil knows exactly what he’s doing, and he and his fellow LIV golfers should be ashamed," Strada wrote in response to Mickelson's comments in his press conference.

"They are helping the Saudi regime ‘sportswash’ their reputation in return for tens of millions of dollars, at the very same time our government is rolling out more damning evidence of Saudi culpability in the 9/11 attacks.

"As the PGA Tour commissioner said Sunday ‘you’d have to be living under a rock’ to not understand the implications of involving yourself with the Saudis."

The group are as outraged as many at Saudi Arabia's mission to sportswash through golf. In May, Greg Norman revealed that LIV Golf Investments had secured a cash injection of £1.6 billion from the Public Investment Fund.

The issue of human rights and morality has been key throughout the emergence of the LIV Golf Invitational Series, as well as big names such as Mickelson, Johnson and DeChambeau defecting for nine-figure sums.

Mickelson appeared very defensive again in his press conference, as he was last week at the first LIV Golf event. He revealed his last chat with PGA Tour commissioner Jay Monahan was in October, but this was the only thing of note.

Next Page: Why the PGA Tour has little to worry about after drab LIV Golf opener...