Just as he did during the first LIV Golf Series event, Phil Mickelson kept his cards close to his chest during a press conference on Monday at the US Open. 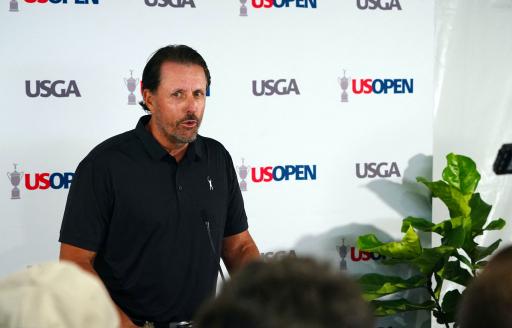 Phil Mickelson failed to elaborate on PGA Tour issues and described his sympathy for the heartbroken families of 9/11 who sent a statement to the six-time major champion.

In his press conference at The Country Club on Monday, Mickelson responded to an in-depth question about Terry Strada who lost her husband in the attacks on September 11, 2001. Strada is the national chair of the 9/11 Families United Group.

The group accused Mickelson, Bryson DeChambeau, Kevin Na, Dustin Johnson and Patrick Reed of betrayal and reminded them of Saudi Arabia's role in the 9/11 attacks.

Lefty gave his sympathy to the families having read the statement from the group, but similar to his media tactic at the Centurion Club last week, Mickelson revealed nothing we didn't already know.

"I would say to the Strada family, I would say to everyone that has lost loved ones, lost friends at 9/11 that I have deep, deep empathy for them. I can't emphasise that enough," Mickelson said yesterday in Boston.

Related: 9/11 families send joint-letter to Phil Mickelson and other US LIV golfers

"I have the deepest of sympathy and empathy for them.

"I would say that I've been a part of the PGA Tour now for 30-plus years, and I have enjoyed my time. I've enjoyed the opportunities it's provided.

"I'm appreciative of that fact. During that time, I've worked really hard behind the scenes as well as on the scenes to try to contribute as a way of showing my appreciation, and I've done the best I can to give back to it as well. So I feel good about that.

Ethical issues in relation to the human rights record of Saudi Arabia were constantly brought up last week at the first LIV Golf event, to which Mickelson would answer, "I don't condone human rights violations."

Now that Mickelson has publicly presented himself in the USA for the first time in what feels like an eternity, the 9/11 attacks have emerged as a topic that has pulled on the heartstrings of the American public the most, off the back of his cooperation with the Saudis.

Next Page: Why PGA Tour has little to worry about after drab LIV Golf opener...