Bryson DeChambeau will be looking to emulate Brooks Koepka's win in 2018 as he looks to defend his US Open title at Torrey Pines this week. 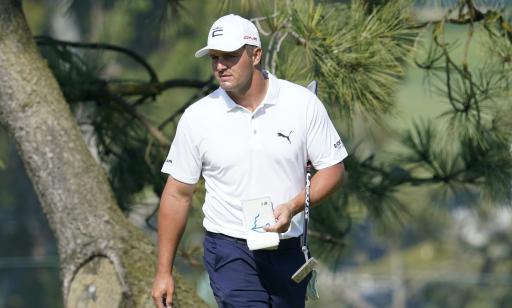 Bryson DeChambeau has vowed to 'bomb and gouge' his way around Torrey Pines this week in his bid to defend his US Open title.

The 27-year-old justified these exact tactics when winning his first major championship at Winged Foot back in September, as he looks to nullify the notorious difficulty of the US Open.

Torrey Pines hosts the Farmers Insurance Open on the PGA Tour each season, but the course is set to present a completely different challenge for the 121st playing of the US Open this week.

"For the most part, I'm going to be trying to bomb it as much as possible and try to gouge it out when I don't hit it in the fairway," said DeChambeau.

"I'd say the rough is a little different, so it's not going to be as easy to get through, I think, with the wedge out here at Torrey Pines compared to Winged Foot. But having said that, I think it's going to be the same sort of strategy."

The World No. 5 has been the centre of attention alongside Brooks Koepka in the build-up to the tournament, as the American pair have gone through a feud for the last few weeks.

There were rumours that the two major champions would be paired together for the first two rounds in San Diego, but instead, they were kept apart much to the disappointment of golf fans.

Despite receiving heckles and calls of "Brooksy" at the Memorial Tournament at Muirfield Village, DeChambeau has brushed off the attention and said he would enjoy competing with Koepka if they were both in contention at the weekend.

Both players have five major titles and three US Open trophies between them and DeChambeau has been very open with the tactics he is set to use this week at Torrey Pines.

NEXT PAGE: PAIGE SPIRANAC ON BRYSON DECHAMBEAU: "IT MAKES ME SICK, I MIGHT THROW UP"