Rory McIlroy rushes onto 18th green to congratulate Matt Fitzpatrick on his maiden major title at the US Open. 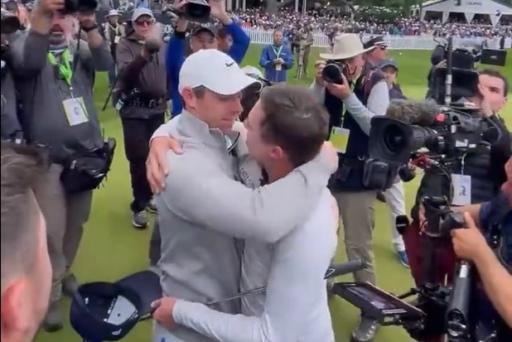 Rory McIlroy may have been hugely disappointed to not land a first major title in eight years at the US Open on Sunday, but he put that to one side for a brief moment to rush onto the 18th green and congratulate Matt Fitzpatrick on his maiden major title at Brookline.

Fitzpatrick ran out a deserved one-shot victor over World No.1 Scottie Scheffler and his final round playing partner Will Zalatoris on 6-under par, while McIlroy finished four shots off the pace in a tie for fifth.

Related: McIlroy takes consolation from US Open slip to move up to World No.2

"All that work pays off, I'm so happy for you," McIlroy can be heard saying to Fitzpatrick while giving him a hug.

Rory then goes over to hug Fitzpatrick's brother, Alex, who is currently ranked the sixth best amateur in the world.

WATCH RORY MCILROY AND MATT FITZPATRICK'S EMBRACE ON THE 18TH GREEN AT THE US OPEN:

McIlroy held every chance of clinching a fifth major title, a second career US Open and first major win in eight years at the weekend, but unfortunately he could not get any real momentum going at Brookline.

Every time he made birdie in the final round, he seemed to follow it up with a bogey and despite a mini fightback on the closing holes. It was ultimately a case of too little too late for McIlroy as he carded a 69 to finish 2-under par for the championship.

He also joins the great Jack Nicklaus as the only other player in the men's game to win the US Open and US Amateur on the same golf course.