Xander Schauffele has revealed a new exercise that he does on the green and we saw it in action at Torrey Pines on Thursday. 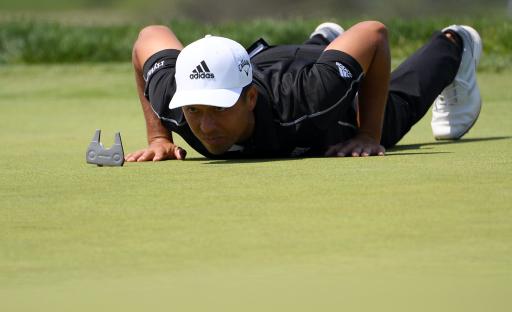 Xander Schauffele made a solid start to the US Open on Thursday by shooting 2-under-par, and this could be a result of his new green-reading technique.

Schauffele, who is back in his home city of San Diego competing at a major tournament, revealed that he has taken advantage of his new green-reading technique to build his strength.

When the World No. 6 prepares to read a putt, he lays on his front and lifts himself with his hands and feet to get as close to the putting surface as possible. And sometimes, he may throw in a few push-ups to make the most of the routine.

"I figured I could just fill out my shirts a little more, so if I could throw in a few push-ups on every hole it would be good for me," said Schauffele.

"I think I'm a real green reader and sometimes when I get even lower I may pick up something that I missed just kind of hunched over or crouched over. Just like the arm lock, I'm trying to find any way to get myself an advantage.

"I think you see Patrick Reed's caddie, Kessler, do it a lot. It's been done before. I just try to make sure I don't really damage the green in any way, shape or form or I'm in anyone's line.

"I think I just started doing it on a few putts and then I kind of liked it and now I'm stuck doing 50 push-ups every day, so it's great."

"Imagine seeing a guy doing this on every hole and shooting 100s," one fan commented.

"Camilo Villegas did it first lol," another fan said.

"It matters. Get down there. Play slow. Go Xander," another fan commented.

"I don't know why more people don't do this. Way better look at your line," one fan said.

It is fair to say that there is a method to Schauffele's madness. Beginning his first round on the 10th hole at Torrey Pines, Schauffele completed his first nine holes in 3-under-par.

A bogey on the par-3 3rd hole brought him back to 2-under-par for the tournament, which is just two behind Louis Oosthuizen and Russell Henley who share the lead.

NEXT PAGE: LOUIS OOSTHUIZEN CO-LEADS AT US OPEN WITH MCILROY, RAHM AND KOEPKA CONTENDING