US Open: Rory McIlroy has "one of toughest days" in third round in Brookline

Rory McIlroy "held his round together" on Saturday at the US Open, carding a 73 to remain in touch with Will Zalatoris and Matt Fitzpatrick out in front. 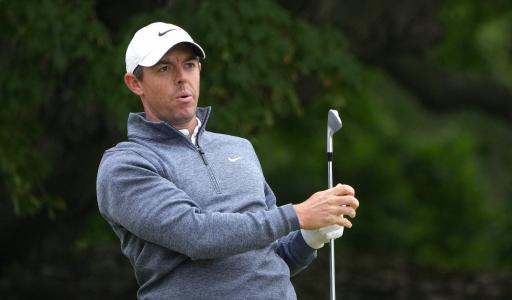 Rory McIlroy experienced one of the "toughest days" he can remember in the third round of the US Open, finishing on 1-under par and within touch of the leaders.

The wind and colder conditions on Saturday in Boston made it very difficult for players to progress up the leaderboard, as McIlroy learned by making three bogeys in his first six holes.

The 33-year-old, looking for his fifth major title and the first one for eight years, made only one birdie on a day of attrition at The Country Club in Brookline.

Nonetheless, McIlroy is just three behind Will Zalatoris and Matt Fitzpatrick who shot respective scores of 67 and 68 in the third round, scores McIlroy described as "unbelievable."

"It was one of the toughest days on a golf course I've had in a long time. I just needed to grind it out, and I did on the back nine. You know, to play that back nine at even-par today was a really good effort, I thought," McIlroy said after his 73.

"Just kept myself in the tournament. That's all I was trying to do. Just keep hanging around. I felt like I did well to get it in under par for the tournament at the end of the day.

"I think more about how I held it together. I think it was sort of like a tale of two sides. I left some out there on the front nine, but I held it together on the back, and I think at the end of the day it evened out.

"I felt like a couple of bad breaks on the front nine, but then I got a really good break on 18.

"I certainly thought I was going to be a few shots further back than I was at the end of the day, but Jon (Rahm) struggled there coming in.

"Even though it was such a tough day and feel like I battled well and whatever, to still only be three back going into tomorrow I feel is a good thing for me."

The Northern Irishman entered the week in a buoyant mood after winning the RBC Canadian Open and flying the flag for the PGA Tour against the rebel LIV Golf Invitational Series.

McIlroy has cut a figure of frustration for almost a decade in major championships. He finished second at The Masters in April and eighth at the US PGA Championship in May.

The former US Open champion has managed to keep his temperament so far this week despite having challenging moments and he will need to hold it together one more time to make a charge at the leaders on Sunday.

Next Page: US Open: Will Zalatoris keeps up INCREDIBLE major championship form