Steve Stricker given "all clear" after mystery illness almost killed him

Steve Stricker has been given the all clear to start practising again after almost dying with a mystery illness. 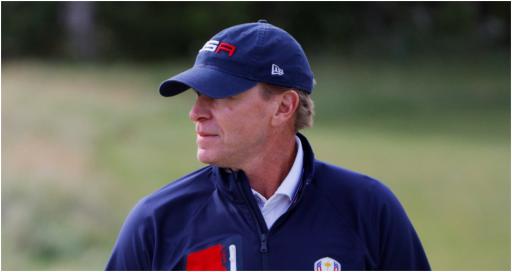 Steve Stricker has confirmed he has been given the "all clear" to start playing again after a mystery illness almost took his life.

After the Ryder Cup at Whistling Straits in September 2021, the winning captain disappeared from public view for a while.

That's not exactly uncommon. That week was the culmination of a lot of hard work so it's understandable to take some time to reflect.

But what actually happened to Stricker was life-threatening. In late October, he came down with a sore throat and chesty cough.

After one evening hunting, he came home and felt funny - he said - and was sweating profusely.

He went to hospital and was poked and prodded. He was tested for COVID-19 and it came back negative.

Super excited that I got the all clear to get after it! But, bummed that I can’t play ⁦@THEPLAYERSChamp⁩ this week. Good luck to all the players, I’ll be watching :) See you in a month or two. pic.twitter.com/wYWSa9W7M0

It took some time for his heart beat to its regular rythm. "It was jumping in and out from Thanksgiving all the way to Christmas eve," he said.

All in all, this illness saw him drop 25 pounds in body weight.

"I'm freshman-in-high school weight. I lost all my muscle. I look like an 85-year-old man, dude. My skin is hanging," he previously said.

Now, thankfully, he has been given the all clear "to get after it". Stricker says he will be back within a month or two.

He was "bummed" that he couldn't participate in The Players at TPC Sawgrass this week.

But I guess some things are more important, right Strick?

Zach Johnson was recently named as Stricker's successor as the Ryder Cup captain for the United States.