Tiger Woods? Matt Fitzpatrick? Who hit the BEST EVER shot in the US Open?

Matt Fitzpatrick's fairway bunker shot on the 18th hole at Brookline will forever be remembered, but where does it stand in the best ever shots in US Open history? 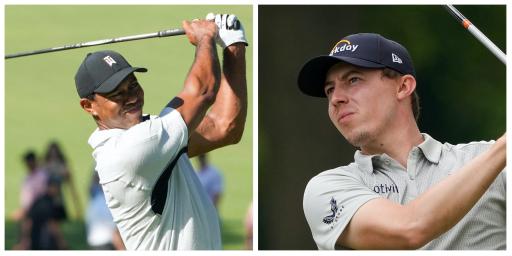 When Matt Fitzpatrick hit his tee shot on the 72nd hole at last week's US Open, he and his caddie Billy Foster must've been fearing the worst.

His ball finished in a fairway bunker, which both men later admitted was one of Fitzpatrick's weak points, and it looked as though the high lip was stopping him from reaching the green.

With one quick swipe, the Englishman splashed it out. His ball travelled 160 yards to the heart of the green and a two-putt was enough to seal his maiden major title.

The shot from the sand was extremely gutsy and due to its difficulty and the pressure attached to it, it will certainly go down as an all-time great moment in the history of the US Open.

But what about the shots that have come before it? The likes of Tiger Woods, Jack Nicklaus and Tom Watson have all produced magic on their way to major victories in America's most coveted championship.

We have taken a look back and narrowed down the top five shots in US Open history, starting with Fitzpatrick's heroic recovery in Brookline on Sunday.

A legendary bunker shot on the 72nd hole and so much more!

Tap below to watch of @MattFitz94's historic 2022 #USOpen victory at The Country Club.

The 27-year-old put on a near-perfect display at The Country Club on Sunday and he came out on top of a titanic battle with nearly-man Will Zalatoris and World No.1 Scottie Scheffler.

Zalatoris must've felt he had been given a lifeline when his playing partner found the sand on 18, as the young American found the middle of the fairway and hit his approach to just over 13 feet.

But Fitzpatrick, also looking for his first major win and his first victory on the PGA Tour, connected perfectly with his ball out of the trap and the rest is history.

The 2008 US Open will always be remembered for the superb battle between Tiger Woods and Rocco Mediate, a championship Woods eventually won in a playoff.

Things could've been so different for Mediate as Woods was on the brink of surrendering the title in regulation play in the final round. The 46-year-old needed a birdie on the final hole to force a playoff.

After playing partner Lee Westwood missed a putt for the playoff, Woods rolled in a putt of roughly 12 feet which curled in the side of the cup. The crowd roared and so did Tiger.

At the 1972 US Open at Pebble Beach, the legendary Jack Nicklaus hit arguably his greatest shot on the par-3 17th hole on his way to a third US Open title.

The Golden Bear pulled a 1-iron from his bag and hit his shot. The ball landed on the green and rattled against the pin, stopping a foot away for a tap-in birdie.

This gave Nicklaus a healthy lead over Bruce Crampton and despite bogeying the final hole, he sealed the deal on 2-over-par and he won by three shots from Crampton in second place with Arnold Palmer back in third.

Tom Watson created another moment of magic on the 17th hole at Pebble Beach in 1982, this time at Nicklaus' expense. He found the thick rough next to the green with his tee shot while tied with Nicklaus.

Watson chipped in to take the lead and he birdied the final hole at the famous venue to finish two shots clear of Nicklaus. This was Watson's sixth of eight major wins.

Rory McIlroy put on an absolute clinic on his way to securing his first-ever major title at the 2011 US Open at Congressional. He won the tournament by eight shots with a 69 in the final round.

The baby-faced Northern Irishman almost made a hole-in-one on the par-3 10th hole when he hit the perfect wedge shot that trundled back down the slope.

His ball stopped just short of the hole, but it is a shot that is synonymous with McIlroy's maiden major title and he has gone on to win two US PGA Championships and an Open Championship too.