A LIV Golf player has hit out at Brandel Chamblee who claimed Charl Schwartzel's win was not what it appeared to be. 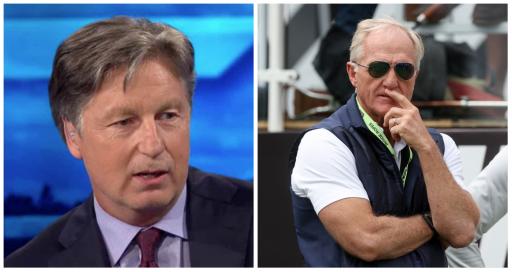 In recent weeks and months Chamblee has taken aim at the LIV Golf players, accusing them of being willing participants sportswashing at the hands of the Saudi Arabian government.

He feels so strongly about the situation that he believes LIV Golf frontman Phil Mickelson should be removed from the Hall of Fame.

After the first LIV Golf event at Centurion Club a few weeks ago, Chamblee also went on an epic rant as he claimed those who are and will play in the super-rich events are “destroying” golf.

"When I hear these players say that they are 'growing the game'... it makes me wanna puke,” he said.

"This is one of the saddest days in the history of golf. Watching these players come together for money and show to the world…they are showing us that they are the greediest, most self-serving, self-interesting, wilfully blind players in the world of golf today."

Well, tell us how you really feel.

Over the weekend, Chamblee had a pretty bold claim:

But Schwartzel didn’t “win” 4.7 million because as it turns out the winnings went against his guarantee, which was never noted on air, proving once again that this Saudi regimen with MBS heading the PIF fund are slow to or don’t pay. https://t.co/7uyBBrcO5S

This was totally refuted according to ESPN reporter and former PGA Tour caddie Michael Collins, who put Chamblee’s claim to an unnamed LIV Golf player:

BRANDEL CHAMBLEE IS LYING (shocker)
Quote from an LIV player:
“1000% not true!! Our guarantee is totally apart from what we make on the course.”
And the photo of the text exchange is with a LIV employee. https://t.co/tgRoBLp8vL pic.twitter.com/0hZzNBhTPn

DeChambeau and Koepka have been named captains for the next $25m tournament.

Koepka turned heads when he was announced to the LIV Golf roster minutes into a press conference held by PGA Tour commissioner Jay Monahan.

He previously distanced himself from a move.

Whereas DeChambeau said he would have “a new type of legacy” after confirming that his move to LIV Golf was “a business decision”.

Next page: Tommy Fleetwood latest to be linked with LIV Golf