US Open contender Joel Dahmen explains playing golf with Tiger Woods ranks above sharing the lead at a major after 36 holes. 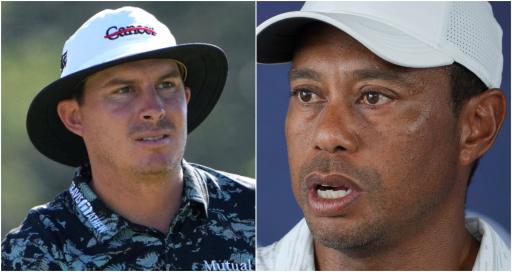 At the start of the week, US Open contender Joel Dahmen admitted finishing inside the top 25 players at The Country Club would make for a successful week.

Related: Pro plays shot from the concession stands at US Open

Heaven knows what he thinks now. Even after a solid start on Thursday where he carded a 67 at Brookline, he wasn't getting ahead of himself.

He relaxed that evening by going to a Ben Rector concert where he planned to do his best not to drink 100 beers during a major week.

Now he is in a share for the lead and if he keeps it going it promises to be a whirlwind few days for the 34-year-old who has won once on the PGA Tour.

That victory at the Corales Puntacana Resort and Club Championship in March 2021 - alongside his best pal and caddie Geno Bonnalie - was obviously a highlight.

"We fight like brothers. We've had a couple dust-ups, and it's always me barking at him and being a jerk," Dahmen told the media after his second round.

"[It's] not so much even blaming him, just kind of being pouty and yeah, being a butthead out there, and Geno will -- I have a very long leash, but every now and then he pulls on it, and I shape up rather quickly."

Dahmen started his professional career playing on PGA Tour Canada, before he joined the Web.com Tour. For a few years he struggled to find his feet before eventually earning his full playing rights in 2016-2017.

If we're being honest. He's a bit of a nearly man. Always in the mix but never quite getting over the line.

He has admitted in the past that he perhaps doesn't work hard enough on his golf. He enjoys his life and likes the balance golf provides.

Knowing that he's got a share of the lead going into the weekend, just how does that rank for Dahmen in his career?

Well, apparently it's not as good as playing with one man.

More: US Open contender once wet himself deliberately to help out teammate

Dahmen said: "Behind playing with Tiger, for sure. Behind winning. Behind getting my Tour card twice.

"I mean, it's up there. This is really cool, but it's really all for naught if you go lay and egg on the weekend."

He added: "Yeah, this is cool. This is fun, but it would be really fun if I was doing this again Saturday and Sunday."

Dahmen explained that in recent weeks and months he's started getting a bit more attention when he's out and about.

He said: "It is unbelievable to me how many people know my name or yell for me out there. It's weird.

"I'm getting recognized a little bit more off the golf course, which is -- my wife will look at me, like, what is happening?

"It's not normal. I don't know if I'll ever get used to it, but it comes with good golf."

What's the craziest thing he's ever had to autograph?

"Hmm, I haven't autographed a boob yet," he joked.