US Open: HVIII says Michael Jordan convinced him not to join LIV Golf

Harold Varner III confirms at the US Open a chin wag with NBA legend Michael Jordan was enough not to join LIV Golf. 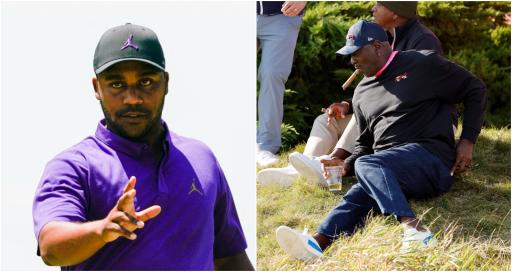 Harold Varner III came into the US Open at The Country Club facing a decision like many other PGA Tour players.

Related: Phil Mickelson reacts to early exit from US Open

That decision was on whether or not he wanted to turn his back on the PGA Tour in favour of the riches of the Saudi-financed LIV Golf series.

And apparently, all Varner III needed to convince him to stay on the established main Tour was a little chat with Michael Jordan.

Yeah, that's right. Michael Jordan. According to a report by the Sports Business Journal, Varner III talked it out with the NBA legend. And apparently he's now made his mind up.

But we've heard that before, haven't we?

If you're an eagle-eyed viewer, you'll notice that 31-year-old Varner is sponsored by Jordan. The iconic "Jumpman" logo is always visible on his clothing.

He told the publication: "It helps because I'm sure he's had decisions like this long before I was even born.

Varner III further explained that he believed that he is concerned that LIV Golf and the PGA Tour are "not working the situation out". He urged commissioner Monahan to "at least talk to the other side".

The LIV Golf series continues to dominate proceedings at the US Open this week. According to various reports, more PGA Tour players are set to announce their intentions to play the second LIV Golf event in Portland at Pumpkin Ridge next month.

Phil Mickelson made his return to major golf on US soil and crashed out with an almighty thud. Literally. He smoked a patron with a wild tee shot before departing.

He admitted that he felt like he was more prepared for the Brookline test. But it wasn't to be.

Viktor Hovland has been linked with a move. He told a Norwegian newspaper this week that he had no plans to join LIV Golf but curiously is not committed to play the Travelers Championship at TPC River Highlands next week.

Varner III missed the cut at the 2022 US Open by two strokes.

Next page: Rory McIlroy doesn't want it to be easy at the US Open