US Open: Brooks Koepka speculates on why "people aren't a big fan of me"

Brooks Koepka points to one reason why golf fans may not like him as he prepares for a big weekend at the US Open. 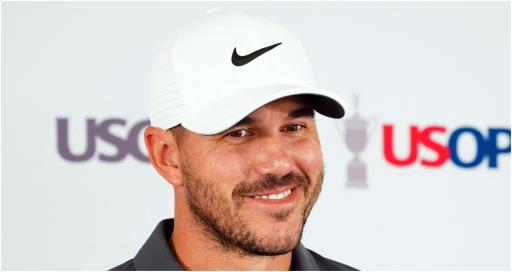 Brooks Koepka moved into the picture at the US Open thanks to a solid 67 on Friday afternoon at The Country Club at Brookline.

And it's fair to say that despite striking his irons "horrific" (his words) in Boston this week he's in a typically confident mood.

And, dare we say it, a little bit mad? A fired-up Koepka up with a point to prove could possibly strike fear into the rest of the competition.

Koepka complained on Monday that he thought a "black cloud" was being cast over one of his favourite majors.

That was because off the non-stop chatter about LIV Golf after an extraordinary press conference with Phil Mickelson.

Perhaps Koepka, 32, was frustrated with the flack his brother Chase was getting for joining the lucrative series backed by the Saudis.

"I think that sucks," Koepka said. Well, he has a point that it's being talked about a lot. It is a big story though, Brooksy.

It's fair to say that Koepka has not been at his best this season. He's missed six cuts this year and one of them was at Augusta National.

He admitted to the media this week that after The Masters and the US PGA (where he finished T-55) his mind was just on getting married.

He said: [In] Tulsa I was just ready to get married. I was waiting for that party, but after Augusta definitely a little disappointed, pissed off, all that.

"I feel like I've been playing a lot better than maybe the results. I'm happy where I'm at this week.

"Maybe a little bit disappointed where I'm at just because of how poorly my iron play is, and usually that's the best part of my game, and it's just not even close to even average."

What has he been doing to try and get his game back where it needs to be?

He said: "Just start beating balls, man. Start practicing. Try to figure out what's wrong, where. You have to be honest with yourself.

"I think that's something I'm pretty good at. Just assess what really needs to be done and what areas can improve. Just been grinding away.

"I feel like it's been really close. Maybe the scores haven't reflected it, but it's only a matter of time."

Koepka was one of only five players inside the top-25 on the leaderboard who carded a 67 on Friday.

It was good enough to see him make the cut with three strokes to spare. Now he's on the hunt.

As you may remember, Koepka joined an exclusive club in 2018 when he won back-to-back US Opens at Shinnecock Hills.

That final round provided one of the toughest tests he has ever faced. And he passed it with flying colours.

He is certainly relishing the challenge presented to him this weekend.

He left his press conference with one message: "I don't come here hoping for second place.

"I think if you are a good player, you want to come in here and win. That's why everybody is teeing it up.

"Nobody has a goal of just making the cut or anything like that.

"I mean, I'm pretty confident, but I feel like everybody should be confident in themselves, and if you're not -- people hate confidence.