Rory McIlroy let his temper get the better of him during the first round of the US Open before making an incredible par. 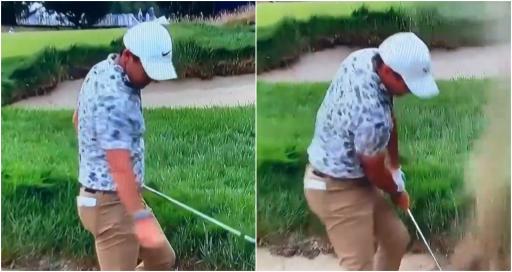 Rory McIlroy let his temper get the better of him during the first round of the US Open before making an unbelievable par save.

Related: Rory McIlroy hits the deck in US Open practice round

McIlroy was going along well and found himself at 2-under par through 13 holes when he sent a poor drive out right on the drivable fifth hole - his 13th hole of the day - when this happened.

The Northern Irishman was left with what looked like a simply impossible shot at The Country Club at Brookline on the 315-yard hole. Getting it on the green would have been a remarkable shot.

Related: Rory McIlroy hits the front in the early stages at the US Open

Four-time major champion McIlroy could be seen fidgeting around trying to find a stance as he attempted to try and hack his golf ball out of the long stuff and onto the green. Anywhere.

Sky Sports commentator Wayne “Radar” Riley noted that McIlroy looked like he was setting up like a Major League Baseball player before attempting a swipe at the ball.

“This is so very difficult,” he said. “Harry Diamond [his caddie], will need to be a genius raker after this episode. It’s easy to shank this.” McIlroy then dumped his ball from the edge of one bunker directly into the fairway trap in front of him.

Uncharacteristically, McIlroy then decided to let his feelings be clearly known as he smashed his wedge into the bunker twice. Immediately after that, Jon Rahm missed a lengthy par putt.

Then he dropped an F-bomb on the 15th green.

“Apologies if you heard any bad language there,” Sky Sports’ Andrew Coltart said. “Two of the top players in the world losing their head there,” added Paul McGinley on the commentary.

McIlroy then played his third shot to about 10 feet and then drained the putt. The crowd roared as he let out a fist pump to keep the momentum going.

It was the second incredible par save by McIlroy at this point. The 33-year-old got up and down on the second hole after sending his approach into the notoriously thick rough.

McIlroy went on to card a solid opening round of 3-under par to tie the lead in the early stages of round one.

Next page: Fed up Shane Lowry rules himself out of LIV Golf