Rory McIlroy dramatically hit the deck after being struck by a shot from Jon Rahm in his practice round ahead of the US Open. 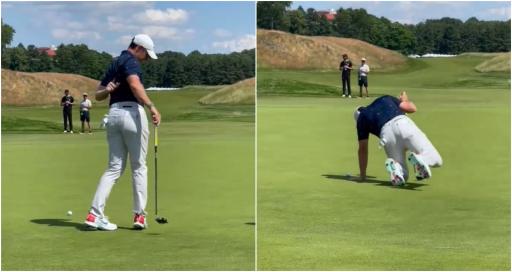 Rory McIlroy admitted last week he would watch the controversial LIV Golf Series opener so he could see what all the fuss was about.

And it appears the Northern Irishman, 33, saw the clip of one spectator taking an hilarious fall after a wayward tee shot from Peter Uihlein.

Uihlein shouted fore and pointed way left to the group of fans who were sitting enjoying the action at Centurion Club.

The fan took an almighty tumble but as it transpired he was having us all on. Perhaps he just wanted his 15 minutes of fame. It worked.

Sportswashing chatter aside, this was very, very funny.

And McIlroy, who is trying to win his second US Open to add to his tally of four majors, recreated this dramatic moment during his practice round.

In the clip, McIlroy is standing on the green and we can hear the familiar Spanish voice of Jon Rahm shouting fore.

The ball clips McIlroy's back leg and then he really theatrically falls to the putting surface. "Taking out the competition," a voice can be heard saying.

More: McIlroy says LIV Golf rebels "have made their bed"

SNIPER at the LIV tourney pic.twitter.com/JpPT4rCRce

At the US PGA, Rahm unfortunately hit ESPN anchor Sage Steele with a wayward tee shot. She has returned to work but needs more dental work.

McIlroy is the betting favourite heading into Brookline this week. Justin Thomas is the second favourite and Rahm is the defending champion.

Both Rahm and McIlroy have been outspoken on the subject of the Saudi-backed LIV Golf series ahead of the third major of the year.

Rahm told the media his heart was with the PGA Tour. McIlroy echoed those sentiments.

The Spaniard is paired with Collin Morikawa and LIV Golf rebel James Piot in rounds one and two.

McIlroy is playing alongside Hideki Matsuyama and Xander Schauffele.

More: Tee times and pairings for the US Open