Shane Lowry rules himself OUT of ever joining LIV Golf: "Had it up to here"

Speaking at the US Open, Shane Lowry says he will never be switching from the PGA Tour to join LIV Golf. 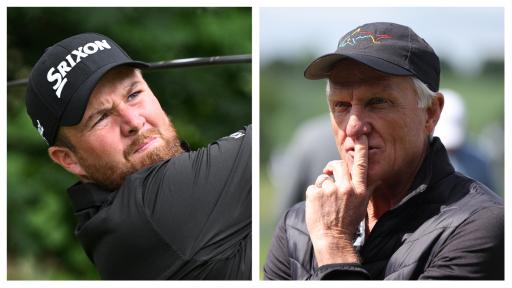 Shane Lowry has ruled himself out of ever joining Greg Norman's controversial Saudi-funded LIV Golf Invitational Series and he says he has "absolutely had it up to here with talking about it" ahead of this week's US Open at Brookline.

Lowry, who won The Open Championship in 2019, admits he would rather have won the RBC Canadian Open won by Rory McIlroy on the PGA Tour last week than the inaugural LIV Golf Invitational London won by Charl Schwartzel, who pocketed $4.75 million for his week's efforts at Centurion Club.

"Every player that's not signed up to it has absolutely had it up to here with talking about it."

Shane Lowry says he and his fellow professional golfers are fed up of speaking about the ongoing LIV Golf Series controversy. pic.twitter.com/r4K0OGtQyf

"Every player that's not there and has not signed up to it has absolutely had it up to here with talking about it," Lowry told Sky Sports Golf.

"It's all anyone talks about no matter where you go, no matter where you are off the course, it's just nice to get back to the hotel and get away from it... but even at that, a few people talk about it again because, not that it's a worrying time for golf, but I don't know what way it's going to go.

"For me, I've played on the PGA Tour and the European Tour, that's what I'm going to do. I've been lucky enough to give my family a life that I never thought was possible playing the game of golf. I'm happy with what I've got there.

"Who knows who will be the next to sign up to it, we just don't know, but I know it's not going to be me. That's where I am with the whole thing.

"Charl won last week, fair play to him, but I'd rather have won Rory's tournament. That's the way I look at it.

"I'd rather win this week [US Open] and you don't even look at your winner's cheque at the end of the day. You're standing there with that trophy with all those names on it, that's what golf is about I think."

Lowry has been enjoying a superb run of form despite not winning with four top-10 finishes in his last nine starts this year.

Next Page: Louis Oosthuizen says he doesn't understand the fuss about LIV Golf