Phil Mickelson should be removed from Hall of Fame, says Brandel Chamblee 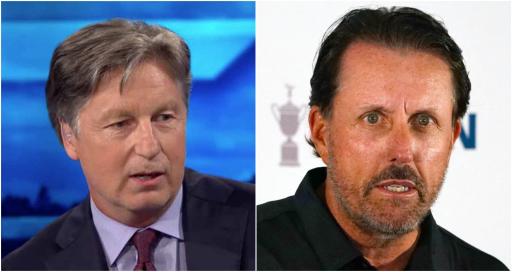 Brandel Chamblee took to social media this week demanding that Phil Mickelson and Greg Norman be removed from the Hall of Fame because of their involvement with LIV Golf.

The controversial Golf Channel analyst said that Norman and Lefty should be booted out because they have “dishonoured” the game and threaten to destroy it.

Mickelson is playing the US Open this week at Brookline, his first major since returning to the golf world following a four-month break from the game amid the fallout of his “reckless” remarks.

Related: Phil Mickelson plays shot from "down in Boris Johnson's hair" then four putts from 12 feet at the US Open,

Lefty faced a barrage of questions from the media on Monday afternoon where he explained that he understands some of his fans may disagree with his decision to continue with the Saudi-financed LIV Golf.

Mickelson is reportedly being paid $200million to play in the eight-event series and has also committed to playing all 10 LIV Golf events next season when the schedule expands.

He told the media of his decision: "I know that many of you have strong, well, many people have strong opinions, emotions about my choice to go forward with LIV Golf.

“I understand, and I respect that. I'm incredibly grateful for the PGA Tour and the many opportunities it has provided me through the years, but I am excited about this new opportunity as well."

Many PGA Tour and LIV Golf players have expressed their strong opinions about what the future of golf may look like in the coming years. Rory McIlroy says the game is currently “fractured”.

Bryson DeChambeau said that he “will have a new legacy” as he claimed that his decision to sign with LIV Golf for a reported $100million after a long-assumed interest was “a business decision”.

As far as I know, it’s never happened that an athlete has been kicked out of their Hall Of Fame but both Norman & Mickelson should be removed from the Hall Of Fame. They’ve dishonored the game & they threaten to destroy the game that they have both so enormously profited from.

Maybe someone who’s in the golf hall of fame should make comments on whether or not they should be removed? Not just media and broadcasters. Not saying much from a rookie who hasn’t done much. Shouldn’t the actual golf and accomplishments be the only thing that matters?

You make a good counter point Dylan. Is the Hall of Fame just abt one’s accomplishments, if so then why is Chi Chi Rodriguez in the HOF? He achieved a lot as a player but it’s what he meant to the game that got him in the HOF. Helping to destroy the game, is the inverse of this. https://t.co/7Yu04LQchK

Elsewhere in the golf world, it is being reported that the DP World Tour face a big decision over whether to embrace LIV Golf rebels onto their circuit or strengthen their ties with the PGA Tour.

Next page: Fed up Shane Lowry rules himself out of LIV Golf