US Open: Phil Mickelson thought he was "more prepared" for Brookline

Phil Mickelson earmarked his putting as a key weakness of his game at the US Open, shooting rounds of 78 and 73 on his way to missing the cut. 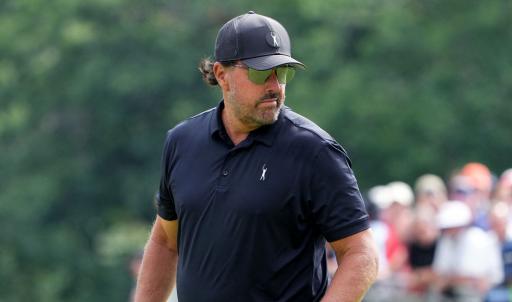 Six-time major champion and six-time US Open runner-up Phil Mickelson thought his game was more prepared than it was for the Brookline challenge.

Lefty played slightly better in the second round on Friday, but with scores of 78 and 73, he finished on 11-over which was well off the projected cutline currently standing at 3-over.

At different stages during the first two rounds, such as when he four-putted one green on Thursday, it appeared Mickelson's concentration and focus were shot.

He is one of the leading names to commit to the LIV Golf Invitational Series and despite receiving warm welcomes from the fans all week in Boston, you feel the controversial backdrop meant he was destined for failure this week.

"I thought I was more prepared than I was," Mickelson said as he left The Country Club on Friday afternoon.

"The US Open is the ultimate test. And you don’t really know where your game is until you get tested, and I thought I was a little bit closer than I was.

"I really struggled with putting. I’m struggling with the putter, last week and this week. I feel I’m certainly playing better than I’m scoring and I look forward to working on it.

"I enjoyed getting back out here. The thing I enjoyed the most was playing such a historic golf course and having it set up so remarkably. I think the USGA really did a good job. It really showcased this historic place," he added.

Mickelson arrived at the US Open this week after the USGA confirmed they wouldn't change their participation criteria based on which players played last week in the first LIV Golf event at Centurion Golf Club.

As he did in Hertfordshire, Mickelson remained coy and defensive about issues regarding the PGA Tour in his press conference on Monday and also how his commitment to LIV Golf has affected the stance of groups such as 9/11 Families United.

The 45-time PGA Tour winner, who has been suspended from the tour despite holding a lifetime membership, is set to tee it up next at the second LIV Golf event in Portland on June 30.