Jon Rahm is "extremely happy" that Tiger Woods is playing the PGA Championship, outlining his incredible comeback from a near-fatal car crash in 2021. 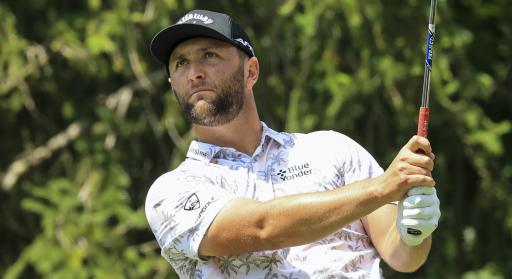 Jon Rahm is happy for the attention to be on Tiger Woods for the week at the PGA Championship as he plans to win his second major title.

The former World No.1 is as excited as the rest of us that Woods is teeing it up at Southern Hills this week, the venue where the 46-year-old won his fourth US PGA title in 2007.

Woods told the press that he feels stronger than he did at The Masters. Rahm played alongside the 15-time major champion in the final round at Augusta National when he valiantly finished 47th.

As for the Spaniard, he won his seventh PGA Tour title at the Mexico Open at Vidanta at the start of the month. He may have lost the top spot in the world rankings, but he is still in fine form in 2022.

"Oh, yeah. Yeah. Of course. Give it to them. We're all happy that Tiger is here, obviously. We're extremely happy. Who would have said over a year ago that he would be competing in major championships again?" Rahm said.

"I was lucky enough to enjoy that Sunday round at Augusta with him and talk to him a little bit firsthand about what he was going through and what he's gone through.

"You know, he's Tiger. He's a competitor. He's going to try to win every single time, and anytime he tees up, the world wants him to win.

"Yeah, totally expected for the attention to be on him, but it doesn't really change anything of what I want to be doing this week."

Rahm has been drawn with former PGA champion Collin Morikawa and the new Masters champion Scottie Scheffler in the first two rounds in Tulsa.

The 27-year-old needed to move mountains to prevent Scheffler from becoming the new World No.1 in recent weeks. The American has won four times in his last eight events and has shown unstoppable form.