Jordan Spieth didn't enjoy his best day at the office on Saturday at Southern Hills, but he got a very lucky break on the 12th hole. 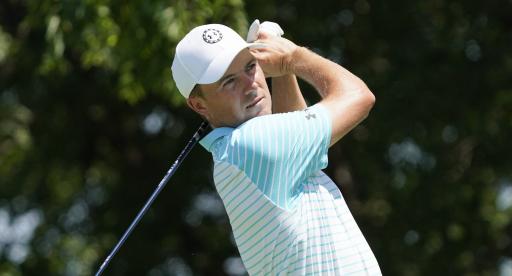 Jordan Spieth struggled to a 4-over-par 74 in the third round of the PGA Championship, but it wasn't all bad for the 28-year-old.

On the 12th hole, Spieth pulled his tee shot left and under some trees in the rough. He could see the green 120 yards away and he tried to manufacture a way to reach the putting surface.

The three-time major champion hit a low punch shot underneath the branches, but as his ball travelled in the air, it looked destined for the water hazard.

However, Spieth's ball landed in the water and it bounced out on to the fairway. Whether it hit a rock under the surface, who knows?

It was arguably the luckiest shot we have seen all week at Southern Hills. Unfortunately, Spieth couldn't capitalise and still went on to make a bogey.

This was one of four bogeys that the World No.8 made on the day. He also made a double-bogey on the 1st hole to put any chances of a moving-day surge out of the window.

Spieth is 5-over-par for the event in tied 45th place. He will have to wait another year for another opportunity to complete his major grand slam.

Spieth entered the week in Tulsa in fine form. He won his 13th PGA Tour title at the RBC Heritage and almost added another when he came second at the AT&T Byron Nelson.

As for the top of the leaderboard, Mito Pereira leads by three shots from Matt Fitzpatrick and Will Zalatoris on 9-under-par.

Next Page: Tiger Woods withdraws from PGA Championship after third-round 79