Tiger Woods appeared to drop a new nickname for Jordan Spieth at the 104th PGA Championship at Southern Hills. 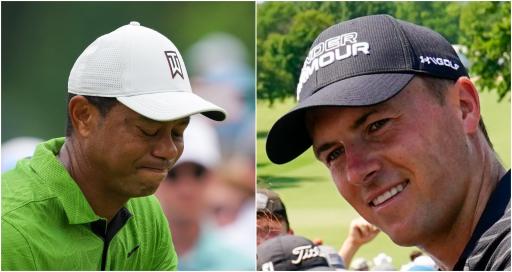 Tiger Woods loves a good nickname. Afterall, he has ownership of the most iconic one in the sporting world.

In case you didn't know, his late father Earl called him Tiger in honour of a fellow soldier and good friend.

Woods, 46, always loves to needle competitors with nicknames of his own. Bryson DeChambeau is "The Rain Man".

Back in his heydey, he was also known to use some rather unkind nicknames for other players. Even his mother Tida used them.

But it looks like he may have invented another one for Jordan Spieth: Spiether.

Woods dropped the nickname in an interview at Southern Hills after grinding hard to make the cut at the 104th PGA Championship.

What do we think, golf fans? It does have a ring to it.

When Woods returned to major golf at the 86th Masters last month at Augusta National he dished about Stewart Cink's hole-in-one.

He affectionately referred to him as Kitchen (as in kitchen cink, get it?!) when talking about his old Ryder Cup team mate.

The only problem was Woods, 46, did not actually come up with the nick name even though he thinks he did.

So the story goes, Cink has been called that name ever since he was a little kid, much to Tiger's disappointment.

"Tiger thinks he started that, but he did not start that," Cink told reporters, saying that the nick name was born when he was a junior golfer.

He played alongside a man called Tim Kitchens and everyone "thought it was hilarious" Kitchens and Cink were playing together.

"Tiger's always called me that, it's just kind of a funny nickname," Cink said, who also made the cut (sitting in T-8) going into the weekend.

"Tiger's got nicknames for everybody just like we have for him and everybody else too. It's is part of the locker room banter."

But can Woods claim ownership of Spiether? It's one that I haven't heard before. I don't know about you. But I like it.