US Open: Scottie Scheffler TOTALLY DUFFS CHIP in US Open second round

World No.1 Scottie Scheffler may be having the season of his life on the PGA Tour, but he showed everyone he is human on the 5th hole on day two of the US Open. 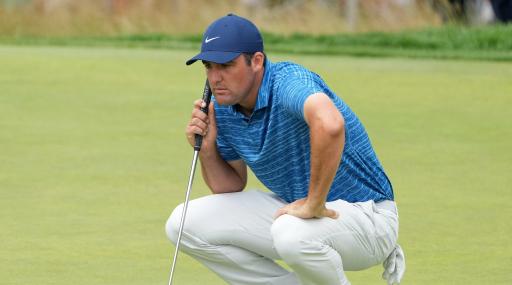 World No.1 and Masters champion Scottie Scheffler showed anyone can make amateur mistakes during the second round of the US Open.

Scheffler wanted to take advantage of the short, but narrow par-4 5th hole. Many of the players have taken on this green from the tee so far this week at The Country Club in Brookline.

His drive was fine and it left him a short pitch to the pin. However, what followed was shocking as Scheffler completely duffed his pitch a couple of yards forwards.

Scheffler's ball rolled back to a similar position to where he played the shot from, it may have rolled back a yard further. It was a shot you'd associate with a club golfer and not the man at the top of the world rankings.

Related: US Open: Did Phil Mickelson and Bones Mackay blank each other on day two of US Open?

World #1 Scottie Scheffler. Say it with me.

ONE. OF. US. #USOpen pic.twitter.com/W6lCs9PwCk

Scheffler hit his next shot close but he went on to make a disappointing bogey. He followed this up with another bogey on the 6th hole and suddenly, the 25-year-old was struggling on 2-over-par.

But in true Scottie style, he put these bad holes behind him. He went on to make birdies on the 8th, 13th and 16th holes. Throw a chip-in eagle in there on the par-5 14th hole and another birdie on the par-3 16th and he was tied for the lead on 3-under-par.

Scheffler's meteoric rise on the PGA Tour is no secret this season. He was winless going into February, but he now has a Green Jacket in his wardrobe and four trophies in his cabinet.

He has spent 12 weeks at World No.1 and it seems he and his caddie Ted Scott have formed the perfect partnership having first met in bible study.

If Scheffler was to win in Brookline this week, it would be his fifth win of the season which would have come in the space of 12 events.