Mito Pereira is on course to have the best week of his career at Southern Hills and his wife has supported him every step of the way. 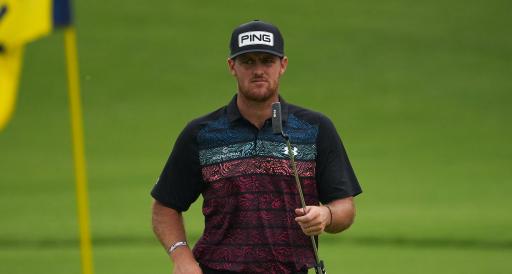 On a gruelling and difficult Saturday in Tulsa that saw many ups and downs, Mito Pereira emerged with a three-shot lead in the PGA Championship.

Despite a mid-round crisis when he made bogeys on the 8th, 9th, 10th and 12th holes, the Chilean carded a 69 to reach 9-under-par, three shots ahead of Matt Fitzpatrick and Will Zalatoris.

Pereira is the first player to lead after 54 holes on his US PGA debut since John Daly at Crooked Stick in 1991. Daly went on to win the event.

Pereira joined the tour in 2021 having won three times on the Korn Ferry Tour last season. Now, he stands to win his first PGA Tour title and his first major championship.

Every step of the way in his golf career has been followed by his wife, Antonia Prida, who has often been seen supporting her husband in his appearances on the PGA Tour.

It is unclear as to when the happy couple began dating but we suspect it was around 2014. In January 2021, the pair got engaged and they got married four months ago.

They were married in Parque Lo Arcaya in Chile where Pereria is from. On January 18, he posted a picture of him and Antonia dancing at their wedding.

There could certainly be more reason to celebrate on Sunday in Tulsa. Pereira is one of only two players to play all three of their rounds under par.

Breathing down his neck will be Fitzpatrick, Zalatoris, Cameron Young and Abraham Ancer. Of these top-five players, only Ancer has won on the PGA Tour.