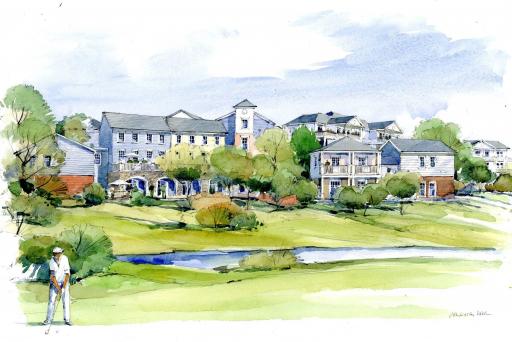 The London Golf Club near Brands Hatch has unveiled plans for a five-star hotel and spa to complement its clubhouse and two Jack Nicklaus-designed golf courses.

The proposed 130-bedroom hotel and leisure development at Ash, will be created in the style of a traditional Kentish village, overlooking the Heritage Course – venue of the 2008 and 2009 European Open and 2011 GolfLIVE.

“When we announced our joint venture partnership with London Golf Club at the European Open in 2009, the goal was to create a world-class golf destination,” said George O’Grady, Chief Executive of the European Tour.

“The golf facilities are proven at every level. Now, with the development of a striking five-star hotel convenient for London and its international airports, London Golf Club is set to position itself among the world’s elite golf resorts and we plan to host major European Tour events in years to come.”

Charles Fairweather, chairman of London Golf Club, said: “While this is a sizeable development, we are proud of the design work that has gone into creating an intimate, village-style resort that will nestle in the landscape.”

“it's the first phase of development. The long-term strategy is to create a world-class destination and venue that will host the biggest and best sporting events over the next 20 years.”