Christiaan Bezuidenhout closes with three straight birdies to join Kiradech Aphibarnrat out in front after 18 holes at the BMW PGA Championship. 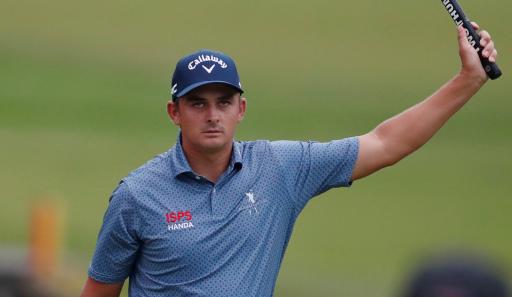 South Africa's Christiaan Bezuidenhout closed with three straight birdies to join Thailand's Kiradech Aphibarnrat out in front on 8-under par after 18 holes at the BMW PGA Championship at Wentworth.

Bezuidenhout, who earned his PGA Tour card following a solo third in the Korn Ferry Tour Championship last week, drained a curling 40-footer for birdie at the par-5 18th.

Tying the lead in style

Bezuidenhout raced out the blocks and was 5-under par through his first nine holes, including an eagle at the par-5 4th.

Aphibarnrat made the turn at 1-under-par but turned up the heat on the back nine, making seven birdies on his way to a first round 64.

Former Masters champion Adam Scott, who is making a rare European Tour start this week, is just one shot off the pace on 7-under par.

A highlight of Scott's round included a hole-out birdie at at the par-4 15th.

Rose said: "I've been a lot cleaner in my thought process over the last couple of weeks."

Former champion Francesco Molinari was bogey-free until the 18th where he finally dropped a shot on his way to a 3-under-par 69.

Ian Poulter, touted as a dead cert to be one of Padraig Harrington's captains picks carded a disappointing level par 72.

Poulter flat out chunked his fourth shot in front of the grandstand on the 18th hole but held his nerve to sink his par putt.

Elsewhere, it was a forgettable start for Italy's Andrea Pavan, who took an 11 on the par 5 4th.

Pavan, a two-time European Tour Champion, reportedly was playing nine off the tee and held up three groups.

Spaniard Miguel Angel Jimenez shot a fine 68 to see him in the clubhouse at 4-under.