Eddie Pepperell says he is grinding "Pretty Ricky" style and still has hope as he made a DP World Tour cut. 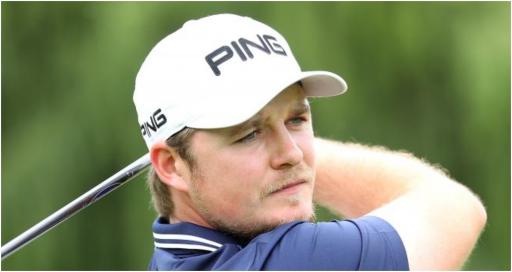 It wasn’t long ago Eddie Pepperell was considered as one of the top players in the game.

Cast your mind back to the 2018 season and he had won two tournaments and banked €2million in earnings as he finished 14th on the European Tour points race.

Arguably, he had a very good case for making the Ryder Cup team in Paris but then captain Thomas Bjorn decided against it. It led to some hilarious barbs from Pepperell about his omission.

“Not everyone was there,” he said during one of the European Tour’s hilarious comedy sketches as Bjorn described a crisp, cold morning at Le Golf National.

But since then and as the pandemic has taken hold it’s been a struggle for the now 31-year-old from Oxford. In 2019 he finished 54th in the Race to Dubai.

He ended the 2021 season in 139th place after missing 13 cuts from 23 tournaments and was one of several surprising names to not earn their full playing rights for this season.

Quite incredibly, it appears I’m making a cut for the first time in God knows how long. I’ve been so bad, and frankly, continue to be. But I am grinding Pretty Ricky style and still have some hope.

Pepperell lamented on his struggles as he told the media: “I’m knackered, I’m stressed, and if I have another year like this one, I’ll certainly have some challenging decisions to make.”

After missing out on the cut at the season ending Aviv Dubai Championship on the European Tour before it’s rebranding, he said: “Every round I’ve played, I feel like I’ve been banging my head against a brick wall.”

At the time, he added: “I don’t want to sound all ‘woe is me’ when you think of what people have dealt with during the pandemic, but when the tour stopped playing shortly after Dubai [he led the Dubai Desert Classic after 36 holes in February 2020] last year I took a few months off and, while the right decision in some ways, I’ve had a hellish time trying to get my skills back.”

Pepperell also said that he knows the perception of him online is that he doesn’t work very hard at it, but he does.

Fast forward to 22 April 2022 and he has just made a cut. And he can’t quite believe it. He is playing the weekend at the ISPS Handa Championship in Spain on the DP World Tour.

“I’ve been so bad, and frankly, continue to be. But I am grinding Pretty Ricky style and still have some hope,” he wrote on Twitter.

Let’s hope this is the start of a more positive chapter in his career.