Ian Poulter is no stranger to playing jokes on Henrik Stenson. The Iceman will no doubt want to retaliate soon enough. 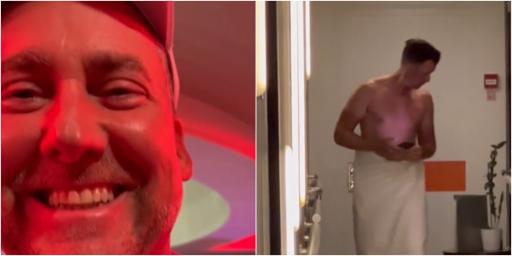 Poulter, 46, captured the moment on film then posted it on his social media. The Iceman looks a bit confused after his massage.

Both players had weeks off after not playing on the PGA Tour or DP World Tour. The player's have a history of pranking each other.

"I just had a lovely treament. Henrik's having his treament after my treament on a client's boat for dinner at a 7.30pm," Poulter says.

"It's now coming up to 7.00pm but he's going to struggle to find his clothes," he says with a mischievous grin. "You're welcome."

Poulter then videos Stenson having a massage before half-inching his trousers, watch and tee-shirt. "He might need those," Poulter narrates.

"Dinner time mate, are you coming?" asks Poulter as Stenson walks through the hallway. "Come on mate, it's dinner time."

It won't be long before Stenson gets his own back, juding by previous incursions between the two giants of European golf.

Both Stenson and Poulter are said to have been offered deals worth many, many millions to ditch their allegiances to the DP World Tour.

It would mean that potentially they would give up their playing rights and the chance to be captain at future Ryder Cups.

Lee Westwood confirmed he had signed an NDA over what he discussed recently with Greg Norman about the proposals.

Luke Donald has emerged as favourite to be captain for the European side when they head to Rome in 2023.

Stenson, 45, was reportedly given an ultimatum. Either choose between the riches of Saudi Arabian money or lead the side.