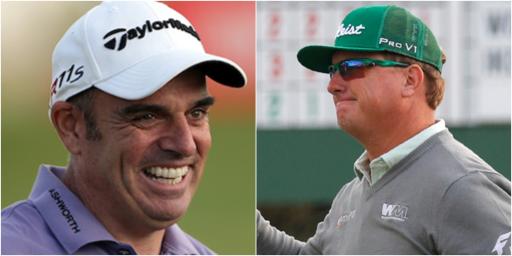 Hoffman put the PGA Tour on blast last weekend in an Instagram rant. He has now deleted that post, but he explained how he believed there was "no accountability" and "no protection for the players" on the PGA Tour after a rules issue at the 2022 WM Phoenix Open.

It led to him suggesting "you wonder why guys are wanting to jump ship". It was a reference to talks of a Saudi-backed golf league. Phil Mickelson and Bryson DeChambeau both jumped on his post and appeared to agree with him.

The journeyman pro, 45, later backtracked and insisted he had nothing but respect for the PGA Tour.

"I meant what I said," Hoffman told the media. "I think I explained it fairly well. It was definitely in the heat of the moment, there's no question there.

"But I was under the impression that the rule had changed.

"Everybody says, 'we're going to change it for the better, we're going to do this and that, we're close' - but nothing seems to get done.

"And unless you come out on a platform like I did it somewhat influences a change. That's what I meant by the rulings and everything else."

He added: "There's no way that it's ever crossed my mind to go over and play for a competitor. Ever.

"I support the PGA Tour through and through and I have no intention of going and playing in another league. But it is a real threat."

"Charley Hoffman's comments were really disappointing for a player who sits on the PAC committee," he said.

"There are only four people on that committee and they sit very closely with Jay Monahan and the PGA Tour board.

"It was quite clear from the reaction afterwards how tone-deaf they are to what's happening in the world at the moment. The conversation so far around Saudi has only revolved around money. As much as they talk about growing the game, it's all about money."

McGinley suggested he believes that European golf is also in a strong position.

"If you're part of the DP World Tour, things have never been better, and things will get even better in the next few years with everything that's going on behind the scenes," he said. "It's a good time to be a professional golfer."