Pablo Larrazabal takes the lead at the Commercial Bank Qatar Masters heading into the final two rounds on the DP World Tour. 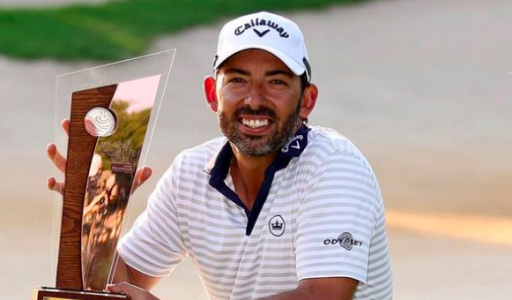 Pablo Larrazabal boosted his claims for a seventh win on the DP World Tour as a score of 71 kept him in the lead at the halfway stage of the Commercial Bank Qatar Masters.

The seasoned Spaniard shot a fantastic round of 8-under-par on Thursday and he followed this up with another round of 1-under-par to keep a narrow lead.

Larrazabal, 38, had a very erratic second day at Doha Golf Club. He started with two bogeys in his opening three holes, and despite making a birdie on the 4th hole, he met more trouble on the front nine.

He bogeyed the 8th hole and made a damaging double-bogey on the par-5 9th hole. He fell back to 4-under-par for the week for a brief moment.

Larrazabal bounced back with an eagle at the par-5 10th hole to cancel out the double-bogey. He made three more birdies coming down the stretch to finish on 9-under-par for the week.

Related: Jon Rahm on Patrick Reed: "I wouldn't say we are friends"

Spain's Pablo Larrazabal scores a total of 9-under par 135 to stay atop the leaderboard, for the second consecutive day, in the DP World Tour's Commercial Bank Qatar Masters at the Doha Golf Club on Friday. @qatar_golf @DohaGolfClub pic.twitter.com/y1PNUekjH2

"It was a tough start. I didn't expect my drive on the first to go so far right and starting par-bogey-bogey was not in the plan," said Larrazabal.

"It was one of those days where you have to keep working and to believe in the way you have been playing in the last month or so and to keep fighting.

He is one shot ahead of Poland's Adrian Meronk, Chase Hanna and the big-hitting Wilco Nienaber on 8-under-par.

Nienaber, who was ranked first in driving distance in the first round in Qatar, shot a bogey-free score of 4-under-par to build on his 68 from Friday.

England's Matthew Jordan and Daniel Gavins are three shots behind the leader on 6-under-par and there is a group of six players in tied 10th on 5-under-par.