Rory McIlroy wants Greg Norman to be AXED as LIV Golf CEO: "He needs to go!"

Rory McIlroy believes Greg Norman needs to step down from his role as LIV Golf CEO: "Nobody is going to talk unless there is an adult in the room." 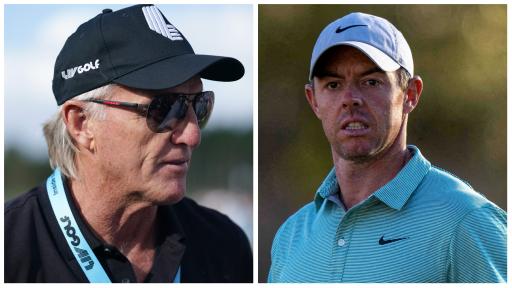 Rory McIlroy believes Greg Norman needs to step down from his role as LIV Golf CEO because the PGA Tour is never going to work with the Saudi-backed circuit "unless there is an adult in the room."

McIlroy was speaking to GolfMagic and a number of other world golf media today ahead of the DP World Tour Championship as the World No.1 looks to win the DP World Tour Rankings for a fourth time in his career.

The Northern Irishman has been particularly strong in his criticism of LIV Golf this season as the unofficial lead voice of the PGA Tour, but he has at least reached a stage where he is eager for the PGA Tour and LIV Golf to "find a compromise" for the good of the game.

Related: You might have missed this from Rory McIlroy after calling on Greg Norman to quit!

nobody is going to talk unless there is an adult in the room who can actually try to mend fences.”

"So, I think there are a few things that need to happen," said McIlroy, who holds the lead in the DP World Tour Rankings heading into the final tournament at Jumeirah Golf Estates.

"Nothing can happen if those two things are going on. You're limited in what you can do. From whatever happens with those two things, there's a few things that I would like to see on the LIV side that needs to happen.

"I think Greg [Norman] needs to go, he just needs to exit stage left. Look, he's made his mark but now is the right time to say 'look, you've got this thing off the ground but nobody is going to talk unless there is an adult in the room who can actually try to mend fences.

"And if those two things happen, then things can happen, but right now, it's a stalemate because there can't be any other way, so hopefully something can happen who knows, but right now, I think the two separate entities, the PGA Tour / European Tour and LIV are just going both their separate ways and one is a very different product to the other. They are just going to keep going until something happens and whether that's in the hands of the court or a judge or if something else happens along the way, nobody really knows. I think right now, it's a bit of a stalemate."

He has chosen to skip Tiger Woods' annual Hero World Challenge in early December, and he also will not be taking part in the PNC Championship with his father Gerry.

"Yes, it would be [nice to finish the year with a win]. It would be, I just think it would be a really nice way to finish off the year, " said McIlroy, who last won a tournament on the DP World Tour back in November 2019 at the WGC-HSBC Champions.

"This is my last event of the season. I know some of the other guys will play in the Bahamas in a couple weeks in Tiger's event. I think the way I've played throughout the year, I've been so consistent, especially the last six or seven months post-Augusta.

"I'm coming off the back of a really good performance and I'll try to replicate that again. I feel like my game is in good shape. So yeah, I would be slightly disappointed if I walked away from here knowing I didn't play as well as if I can, and I know if I do play like that, I'll give myself a good chance."

McIlroy's latest comments about the future of the LIV Golf League come just a week after Norman delivered yet another dig at McIlroy.

There had been a strong rumour last week that Norman was about to step down from his role as LIV Golf CEO, but the group's managing director Majed Al Surour has dismissed such reports.

PGA Tour commissioner Jay Monahan recently reiterated that those players to have defected to LIV Golf this year, who are still members of the PGA Tour, will not be welcome back anytime soon.

Despite many PGA Tour players switching allegiance to LIV Golf in recent months, there are still a number of players on the Saudi-backed Tour who are still members of the PGA Tour such as Brooks Koepka, Phil Mickelson, Bryson DeChambeau and arguably their highest-profile signing to date in 150th Open champion Cameron Smith.

Some players on LIV Golf have now binned their PGA Tour cards such as Dustin Johnson and Sergio Garcia, as to avoid any ongoing legal battles and to fully dedicate the rest of their careers to LIV Golf without any issues.

All LIV Golf players who are still members of the PGA Tour remain suspended from competing in all PGA Tour events moving forwards.

As for the DP World Tour, players who have competed in LIV Golf tournaments remain eligible to compete in their tournaments - at least until the next court hearing on the matter in February 2023.