European Tour player Richard Bland played a fantastic shot out of a serious area of rough during the Joburg Open. 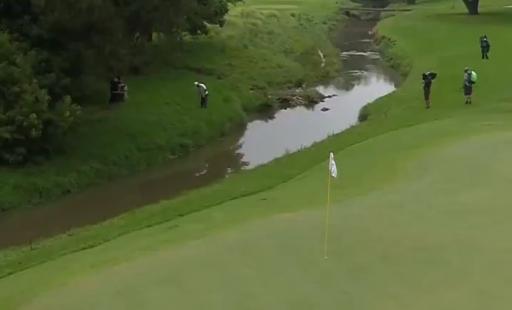 Golf fans have applauded European Tour player Richard Bland for his incredible shot out of knee-high rough during the final round of the Joburg Open on Sunday.

Englishman Bland put in a stellar performance during last week's Joburg Open at Randpark Golf Club and he produced one of the best shots of the week during the final round on Sunday.

Bland would eventually finish in T7 at 12-under par, but after finding serious trouble on a par-4, it looked as though his ball had fallen victim to the thick kikuyu grass.

It's an area of rough that nine times out of ten will have you declaring a lost ball and taking a drop, but Bland and his caddie managed to find his ball and everyone was thinking the worst when he stepped up to take the shot, with the rough coming up to his knees.

The 47-year-old then produced a moment of magic, one that took the commentary team by surprise.

WATCH THE SHOT IN THE VIDEO BELOW:

Bland dropped a shot on the hole, but he'd have bit your arm off if you offered him a bogey after seeing his ball fly into the kikuyu.

Joachim B Hansen went on to win the event and his first European Tour title, much to the delight of his wife, who was seen banging on a table and screaming in celebration after seeing her husband sink the winning putt.

After videos of Bland's shot circled on social media, golf fans congratulated him for pulling off such a difficult shot.

"Unbelievable shot from Bland there! I'd still be hacking the grass hours later if that was me," said one golf fan on Instagram.

"Pure class and experience from Bland, although I'm not sure what he was doing over there in the first place!"