Joachim B Hansen was three shots off the lead as he started the back nine, but clawed his way back to a two-shot victory at the Joburg Open. 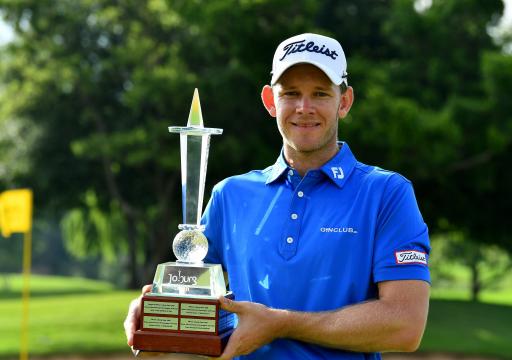 Joachim B Hansen won his maiden European Tour title at the Joburg Open on Sunday after he took advantage of two late mistakes from Wilco Nienaber.

It was an incredible turnaround from Hansen, who was three strokes off of the lead as he made the turn onto the back nine, before he made three birdies in five holes.

Hansen handled the pressure over the last two holes, making par at both 17 and 18, while overnight leader Nienaber bogeyed both to hand the Dane a two-shot victory.

"It's quite emotional," said Hansen. "Wilco got in front quite quick, by three shots, and we managed to stick to our game and our plan. He's long, he's got some good things with the game hitting it very far and very straight so we knew we had to go out and do our own and do the things we've done the first three days.

"We succeeded pretty well today. I putted really well, almost haven't missed a putt inside six feet and holed a lot of long ones as well."

Hansen's first win on the European Tour clearly meant the world to the 30-year-old and his wife celebrated the victory on a video call, where she banged on the table and screamed after seeing her husband make the winning putt.

WATCH HANSEN'S WIFE REACT TO THE WIN BELOW:

Nienaber looked to be the man to beat during Sunday's final round at Randpark Golf Club, racking up three birdies in a row on the front nine to extend his lead.

Hansen chased Nienaber down with three birdies of his own on the back nine to tie the lead, before both players scrambled for pars at the par-4 16th.

A mistake from the tee at 17 from Nienaber looked destined for a splash, but he somehow escaped the water and managed to walk away with a bogey, but Hansen's par on the hole gave him the solo lead.

Both made mistakes off the tee down the last and after Hansen's second found the bunker, he played his third brilliantly to six feet and rolled it in for par while Nienaber made a bogey.

A bogey-free final round of 67 for Hansen left him on 19-under par for the tournament.